The Mighty Clint Eastwood’s Cry Macho arrives tomorrow — the 91-year-old, multi-Oscar winner’s umpteenth movie as director and star — so I thought this would be an excellent time to look back at some of Eastwood’s other offbeat offerings.

Not every Clint movie has him gunning down hippie scum—although that would be nice.

Here they are, and they are all great…

Eastwood directs and accepts what is basically a supporting role to Kevin Costner’s best-ever screen performance.

We’re in Texas, the year is 1963,  and Costner is simply superb as Butch Haynes, a violent convict who kidnaps eight-year-old Philip (T.J. Lowther) during his escape. So man and boy (a sheltered Jehovah’s Witness) set off on a violent road trip to New Mexico.

Costner’s mercurial, quick-tempered killer with a code all his own keeps you off-balance the whole time. Eastwood has a blast playing the old-fashioned Texas Ranger, chasing him down in one of those new-fangled recreation vehicles, including a feminist criminologist (Laura Dern).

The final sequence with Costner confronting an abusive father is as good as acting (and moviemaking) get. This one grows in reputation with each passing year and deserves to. 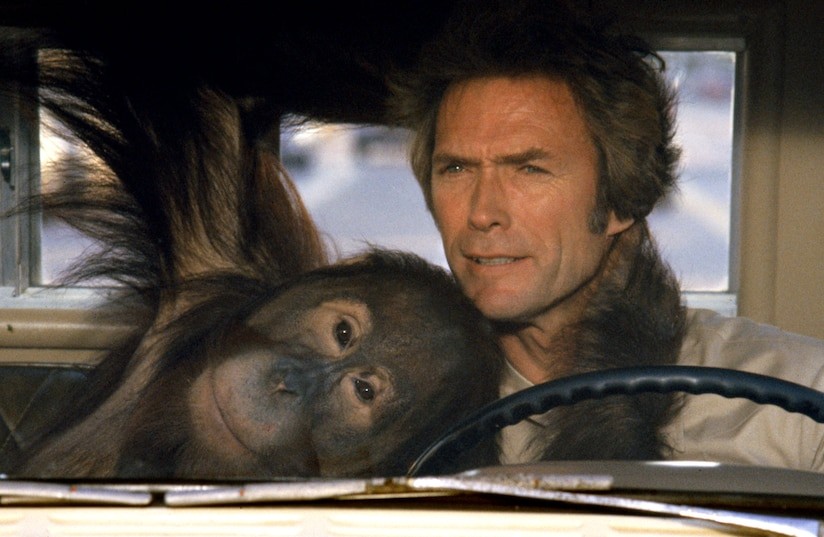 Clinton Eastwood is trucker and prize-fighter Philo Beddoe, who roams the valley with his pet orangutan. (Warner Bros.).

Long before action superstars like Stallone, Schwarzenegger, and Dwayne Johnson decided to go for laughs, Clint disregarded the advice of everyone around him to produce and star in a honky-tonk comedy co-starring an orangutan. The fact that it’s set in California doesn’t matter. Back then, there was still a country-and-western feel in Reagan Country, and that’s one of the movie’s pleasures—how it captures a time and place long gone.

This movie is tasteless, hilarious, goofy, full of good music, full of good ole’ boys, beer-drinking, pickups, and bare-knuckle brawling. Best of all,  it will give wokesters a stroke. What we have here are 114 unpretentious minutes of pure fun.

Oh, and it might still be (accounting for inflation) the biggest box office hit of Eastwood’s amazing career. 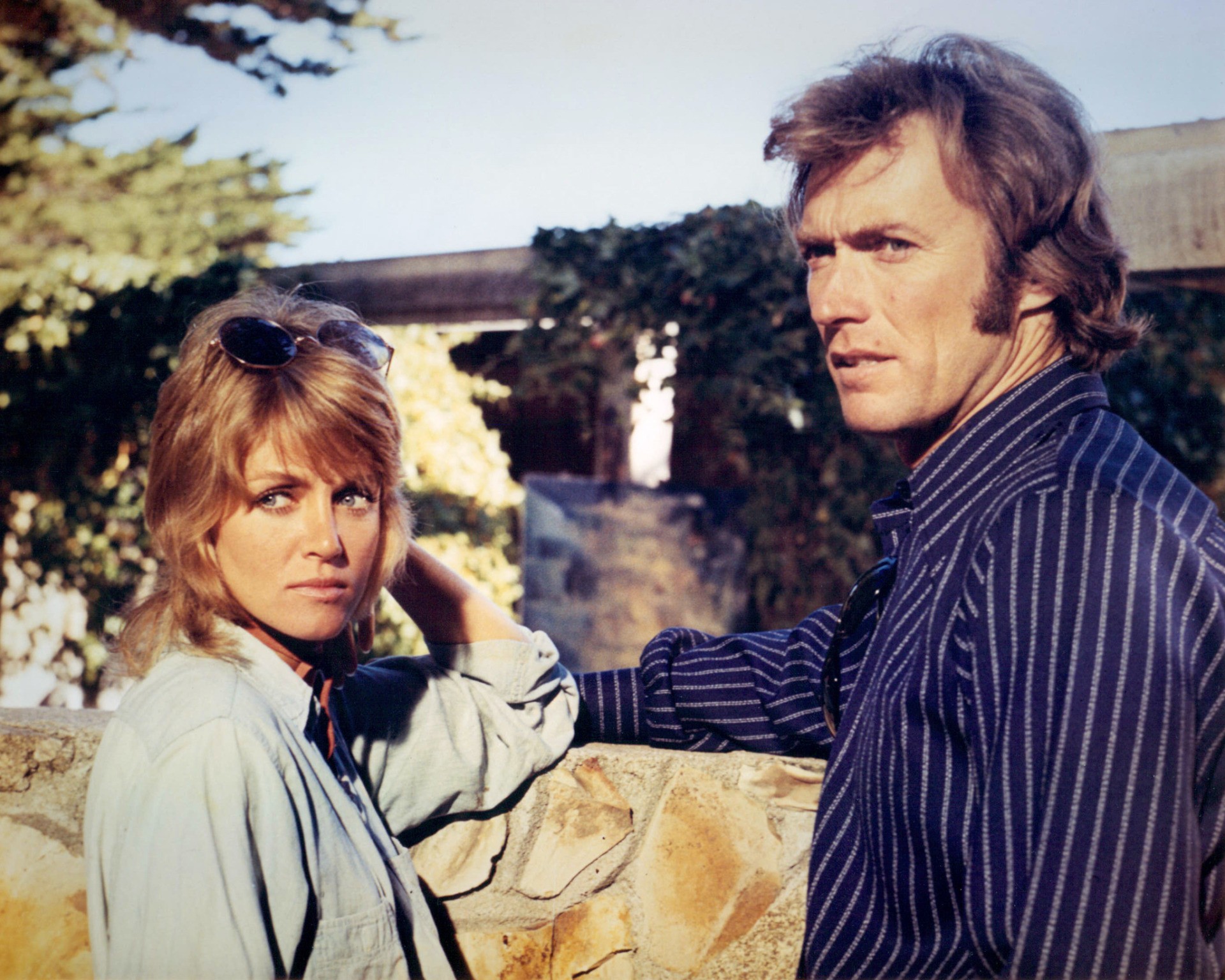 Donna Mills, US actress, and Clint Eastwood, US actor, in a publicity still issued for the film, ‘Play Misty for Me’, 1971. The psychological thriller, directed by Clint Eastwood, starred Mills as ‘Tobie Williams’, and Eastwood as ‘Dave Garver’. (Silver Screen Collection/Getty Images via IMDB/Universal Pictures)

Eastwood’s first time behind the camera is still a doozy of a woman-scorned thriller, one superior to its stepchild, Fatal Attraction.

This movie is beautifully filmed, full of tension, and Eastwood even allows his character to come off as a bit of a heel. 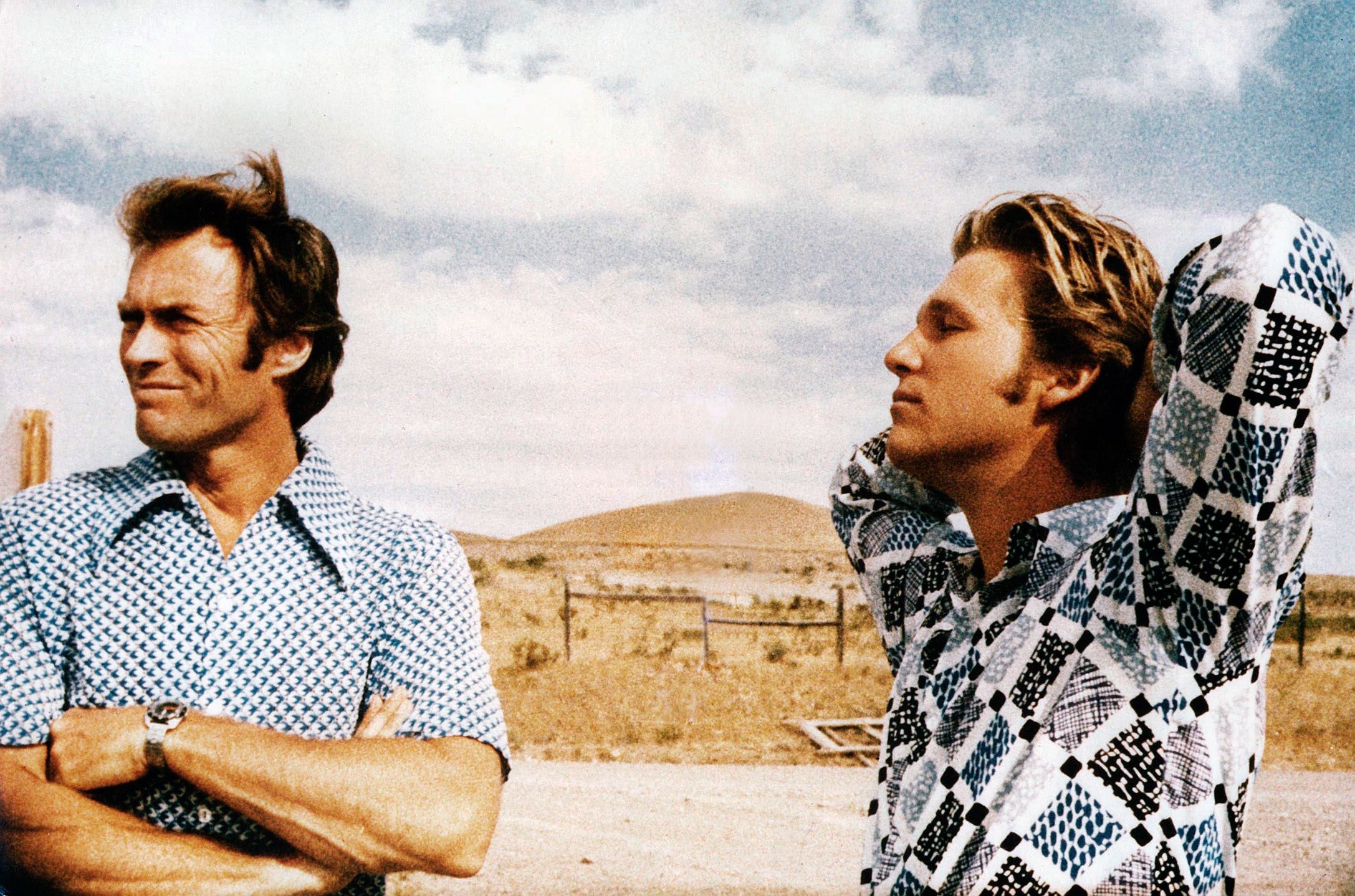 Clint actually does shoot a gun in this one. In fact, he shoots a massive gun, but I still include it because it is definitely one of his more off-beat projects.

Eastwood saw something in a young, pre-Deer Hunter Michael Cimino (who wrote and directed) and agreed to produce and star in this combination heist/road picture that’s both exciting and beautifully photographed. I still remember seeing this at the drive-in — I was probably eight or nine at the time — and being shocked to see Clint Eastwood —Clint Eastwood!— playing a preacher in the opening scene.

Overall, though, this is a movie about the touching relationship between the two leads, played by Eastwood and a very young (and very good) Jeff Bridges. That’s the heart of the movie, the part you take home with you. 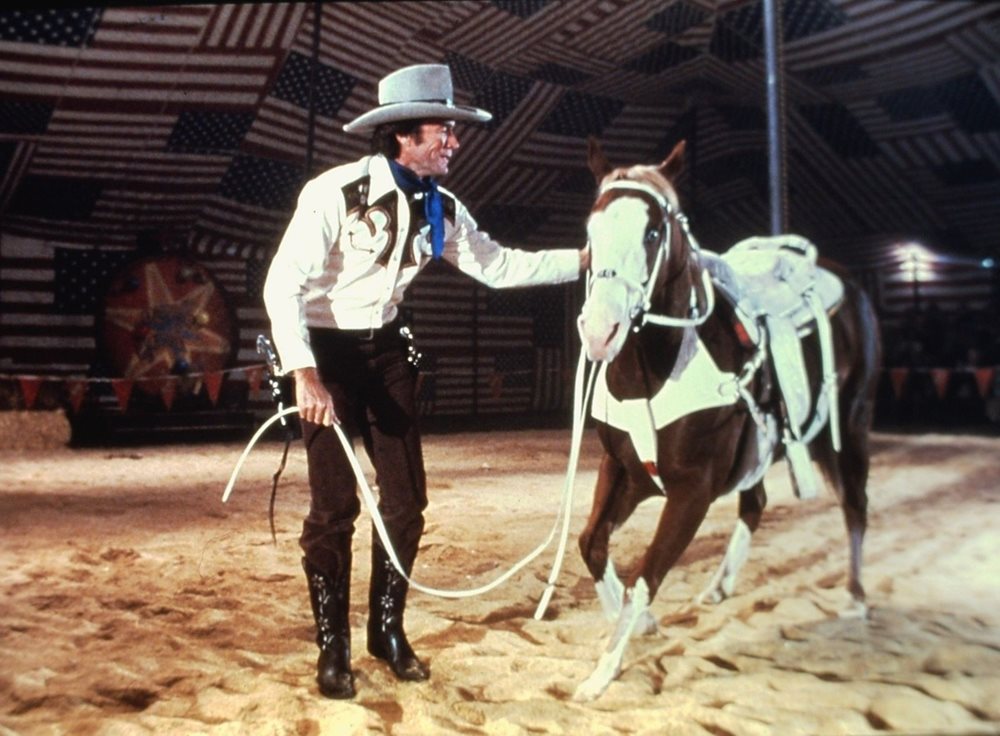 If you catch me on the right day, I’ll tell you this is my all-time favorite Clint Eastwood movie.

At the time, it was a moderate hit, and it’s not hard to see why.  Eastwood plays “Bronco” Billy McCoy, an achingly sincere (you little pard’ners brush your teeth now) and eccentric cowboy star barely holding on to his outdated Wild West Show.

But he also does it because he loves the people he works with, an assortment of characters, including a draft dodger, who represent America, and not just by way of skin color, but through a wide array of very different personalities.

Eastwood’s message here is as American as it gets. He’s saying there’s room for everyone in this great country, and in the finale, with his big top tent sewn together with hundreds of American flags, and under that tent is a potpourri of individuals whose only common trait is that they tolerate and accept people different from themselves, what Clint leaves you with is one of the most American movies of all time, one that stands up for the glory of the individual and the vital importance of individualism.