LONDON (AP) – Queen Elizabeth II’s coffin will leave Buckingham Palace for the last time Wednesday as it is taken amid somber pageantry on a horse-drawn gun carriage past crowds of mourners to the Houses of Parliament, where the late monarch will lie in state for four days.

Crowds began massing early along the flag-lined road outside the palace for the procession from the monarch’s official London residence to the historic Westminster Hall at Parliament. King Charles III and other members of the royal family will walk behind the coffin.

Thousands of people are gathering on The Mall outside Buckingham Palace and along the banks of the River Thames hours before the coffin procession begins. People in the crowd cheered when Charles waved to them as he drove from his residence, Clarence House, to the palace.

LONDON, ENGLAND – SEPTEMBER 14: King Charles III is driven from Clarence House to Buckingham Palace on September 14, 2022 in London, United Kingdom. Queen Elizabeth II’s coffin is taken in procession on a Gun Carriage of The King’s Troop Royal Horse Artillery from Buckingham Palace to Westminster Hall where she will lay in state until the early morning of her funeral. Queen Elizabeth II died at Balmoral Castle in Scotland on September 8, 2022, and is succeeded by her eldest son, King Charles III. (Photo by Tom Nicholson – WPA Pool/Getty Images)

Joan Bucklehurst, a 50-year-old retail worker from Cheshire in northwestern England, said the queen “meant so much for everybody.”

“She was amazing, yeah,” she added, choking up with emotion. “So, we had to be here. We’ve been here a few times when there have been special occasions, but this one, I couldn´t miss this.”

The crowds are the latest manifestation of a nationwide outpouring of grief and respect for the only monarch most Britons have ever known, who died at her beloved Balmoral summer retreat on Thursday at age 96, ending a 70-year reign. 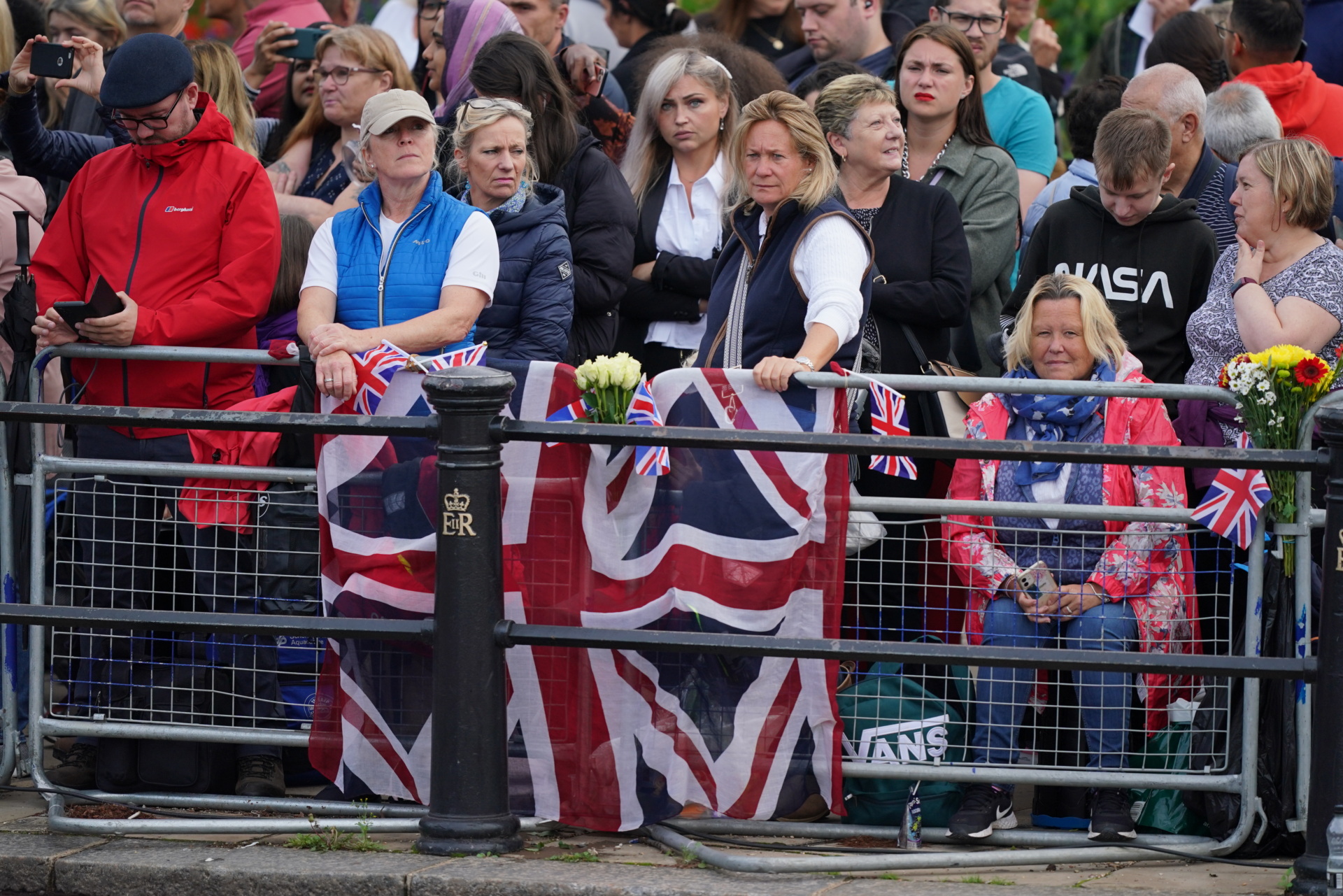 Members of the public wait near to Buckingham Palace ahead of the ceremonial procession of the coffin of Queen Elizabeth II, from Buckingham Palace to Westminster Hall, London, where it will lie in state ahead of her funeral on Monday. Picture date: Wednesday September 14, 2022. (Photo by Dominic Lipinski/PA Images via Getty Images)

“It’s a very sad day, but it’s our last opportunity to do our duty for the queen and it’s our first opportunity to do it for the king, and that makes us all very proud,” said Maj. Gen. Christopher Ghika, of the Household division, who is responsible for organizing the ceremonial aspects of the queen’s funeral.

London’s Heathrow Airport said it was adjusting timetables to prevent overhead planes disturbing the procession. British Airways canceled 16 flights as a result of the changes.

The airport said in a statement that the changes would “ensure silence over central London as the ceremonial procession moves from Buckingham Palace to Westminster Hall.”

Troops involved in the procession have been preparing since the queen died. So have the horses of the King’s Troop Royal Horse Artillery. 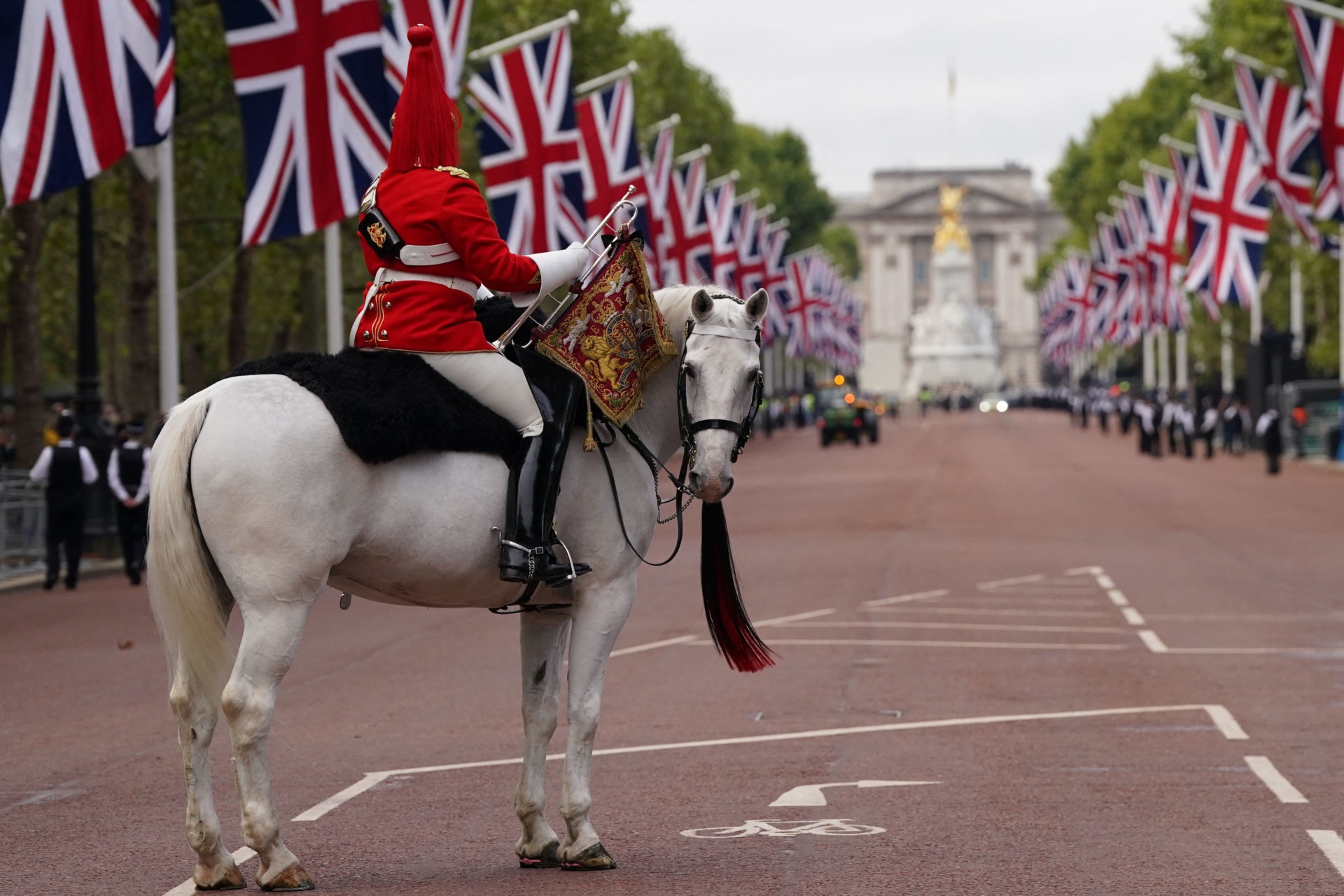 A military horse waits The Mall in central London on September 14, 2022, ahead of the ceremonial procession of the coffin of Queen Elizabeth II, from Buckingham Palace to Westminster Hall. – As preparations build for next week’s state funeral, the royal family on Wednesday will walk behind the queen’s coffin in a procession through central London, after which thousands of members of the public are expected to come to pay their final respects at her lying in state. (Photo by Victoria Jones / POOL / AFP) (Photo by VICTORIA JONES/POOL/AFP via Getty Images)

Sgt. Tom Jenks, from the King’s Troop Royal Horse Artillery, said that the horses have undergone special training, including how to handle weeping mourners, as well as flowers and flags being thrown onto streets as the procession passes by.

People stood behind metal barriers or sat on folding chairs, umbrellas at the ready, takeout coffees in hand under gray skies hours before the coffin was scheduled to leave the landmark palace at 2:22 p.m. (1322 GMT).

Crowds have lined the route of the queen’s coffin whenever it has been moved in its long journey from Scotland back to London.

On Tuesday night, thousands braved a typical London drizzle as the state hearse, with interior lights illuminating the sovereign’s flag-draped casket, drove slowly from a military air base into the heart of London. 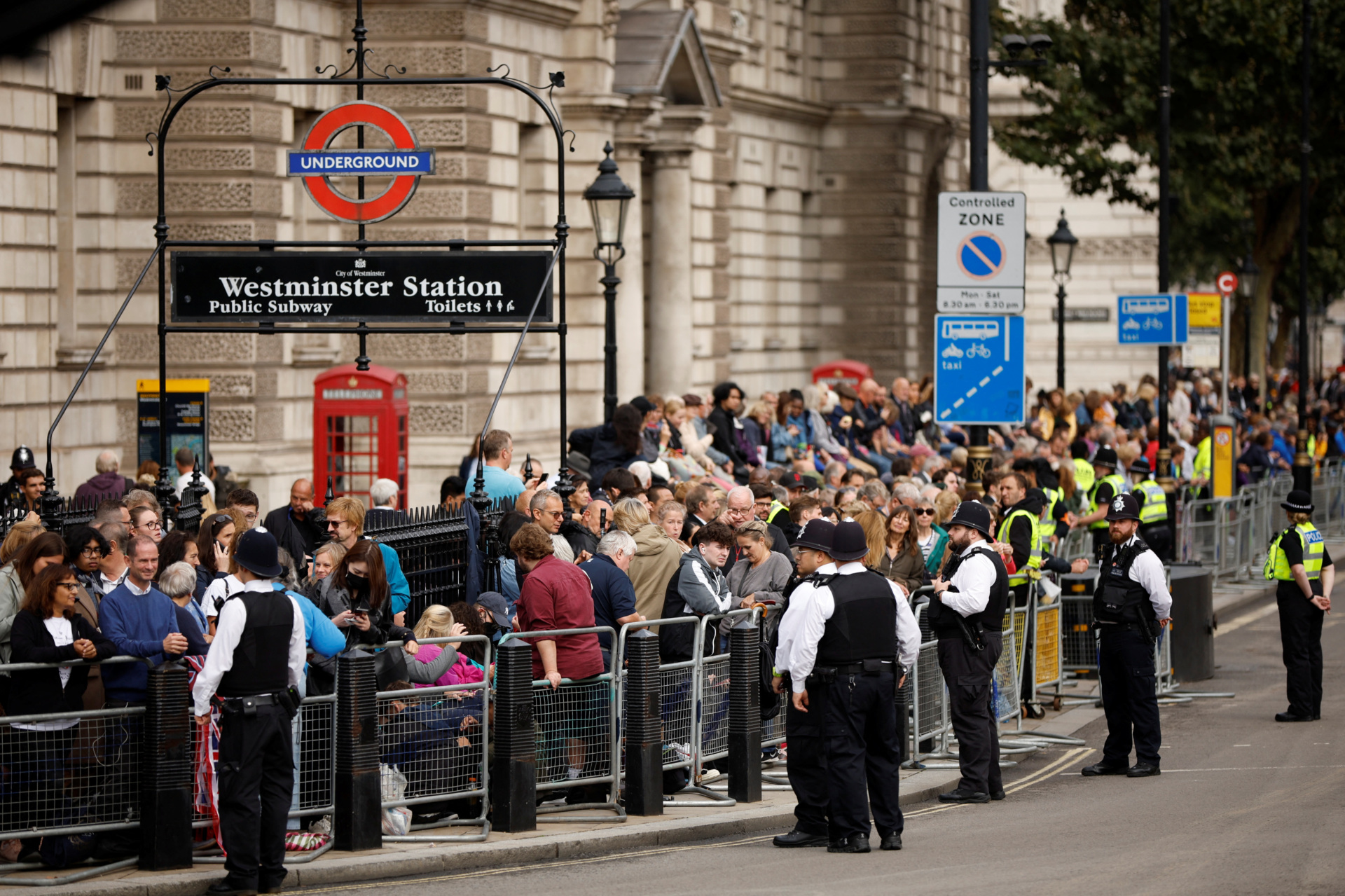 LONDON, ENGLAND – SEPTEMBER 14: Members of the public wait to see the coffin of Queen Elizabeth II as it is transported from Buckingham Palace to the Palace of Westminster on September 14, 2022 in London, United Kingdom. Queen Elizabeth II’s coffin is taken in procession on a Gun Carriage of The King’s Troop Royal Horse Artillery from Buckingham Palace to Westminster Hall where she will lay in state until the early morning of her funeral. Queen Elizabeth II died at Balmoral Castle in Scotland on September 8, 2022, and is succeeded by her eldest son, King Charles III. (Photo by John Sibley – WPA Pool/Getty Images)

Geoff Colgan, a taxi driver who took the day off to witness the moment, stood stunned in the moments after the queen’s coffin passed.

“It’s one of those things you know would happen, but when it does you can’t believe it,” he said, holding his toddler.

Earlier, in Edinburgh, some 33,000 people filed in silent respect past her coffin as it lay for 24 hours at St. Giles´ Cathedral.

Hundreds of thousands are expected to do the same in London when the queen lies in state at the 900-year-old Westminster Hall, the oldest building in Parliament, for four days before her state funeral on Monday. 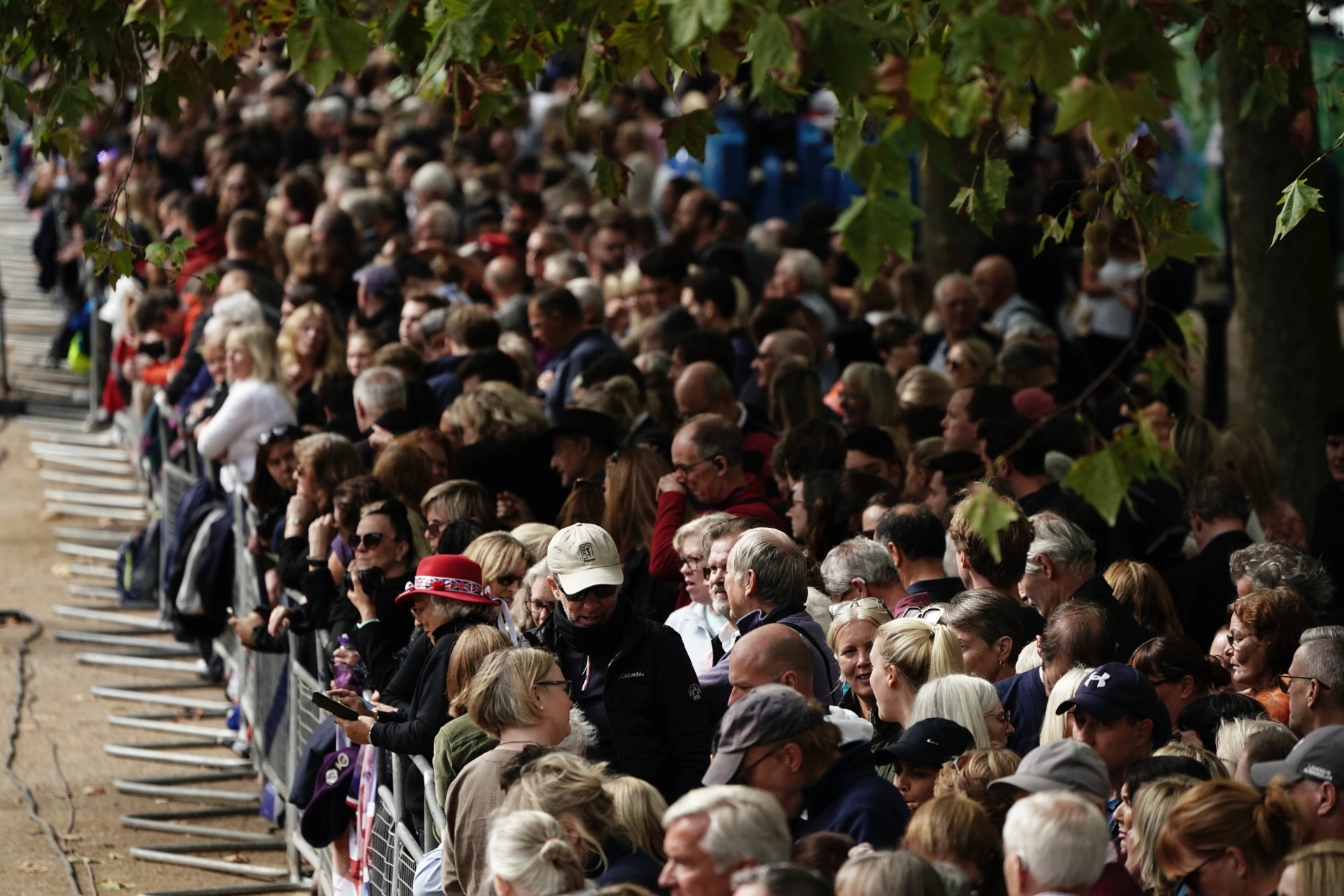 LONDON, ENGLAND – SEPTEMBER 14: Crowds gather along the Mall ahead of the coffin of late Queen Elizabeth II departing in procession to Westminster Hall on September 14, 2022 in London, United Kingdom. Queen Elizabeth II’s coffin is taken in procession on a Gun Carriage of The King’s Troop Royal Horse Artillery from Buckingham Palace to Westminster Hall where she will lay in state until the early morning of her funeral. Queen Elizabeth II died at Balmoral Castle in Scotland on September 8, 2022, and is succeeded by her eldest son, King Charles III. (Photo by Aaron Chown – WPA Pool/Getty Images)

The hall is where Guy Fawkes and Charles I were tried, where kings and queens hosted magnificent medieval banquets, and where ceremonial addresses were presented to Queen Elizabeth II during her silver, golden and diamond jubilees.

Chris Bond, from Truro in southwest England, was among those lining up along the banks of the River Thames. He also attended the lying in state of the queen’s mother in 2002.

“Obviously, it’s quite difficult queuing all day long, but when you walk through those doors into Westminster Hall, that marvellous, historic building, there was a great sense of hush and one was told you take as much time as you like, and it’s just amazing,” he said.

“We know the queen was a good age and she served the country a long time, but we hoped this day would never come,” he added.

Chris Imafidon, secured the sixth place in the queue.

“I have 1,001 emotions when I see her,” he said. “I want to say, God, she was an angel, because she touched many good people and did so many good things.”