A large protest against the Taliban regime, organized and led primarily by women, was violently dispersed by Taliban thugs on Tuesday. Demonstrators were whipped, beaten with clubs, and driven away by gunfire.

The protest was reportedly prompted by the arrival in Kabul of Pakistani Lt. Gen. Faiz Hameed, director of Pakistan’s infamous Inter-Services Intelligence Agency (ISI). The Pakistani government has a long history of supporting the Taliban, both overtly and covertly. Hameed came to Kabul for meetings with the Taliban government, which announced its “interim” leadership of hardline extremists and outright terrorists on Tuesday.

Opponents of the Taliban regime claim Pakistani drones and helicopters were deployed to help crush the resistance movement in Panjshir Valley over the weekend, a charge echoed by the government of Iran.

Taliban fighters keep vigil as Afghan women take part in an anti-Pakistan demonstration near the Pakistan embassy in Kabul on September 7, 2021. – The Taliban on September 7, 2021 fired shots into the air to disperse crowds who had gathered for the rally in the capital, the latest protest since the hardline Islamist movement swept to power last month. (HOSHANG HASHIMI/AFP via Getty Images)

The demonstrators in Kabul on Tuesday expressed support for the Panjshir resistance movement, waving signs with hashtags and slogans such as #SanctionPakistan, #StandWithPanjshir, and “Pakistan, Pakistan, Leave Afghanistan.” Many of the women chanted “Freedom, freedom!” as they walked.

“We invited people using social media platforms. And there were more people than we expected. We are expecting more rallies tonight because people do not want terror and destruction,” one of the female protest organizers told the New York Times, using the pseudonym “Rezai” in fear of Taliban retribution.

“The Taliban have had no achievements since they have taken power except for killing people and spreading terror. So it was an utterly self-motivated protest, and we just coordinated and invited people to participate,” she said.

“We must continue our protest against dirty Pakistan, which is interfering in Afghanistan. Why is Pakistan not being sanctioned? We will never recognize this government, which is a puppet of Pakistan and attacks our people and violates women’s rights and dignity,” one of the protesters told the Wall Street Journal (WSJ) in a telephone interview.

“I have come today to ask why Pakistan is destroying Panjshir. I am from Panjshir. People need to express their anger, men and women, they must not stay silent,” said another demonstrator quoted by NBC News. 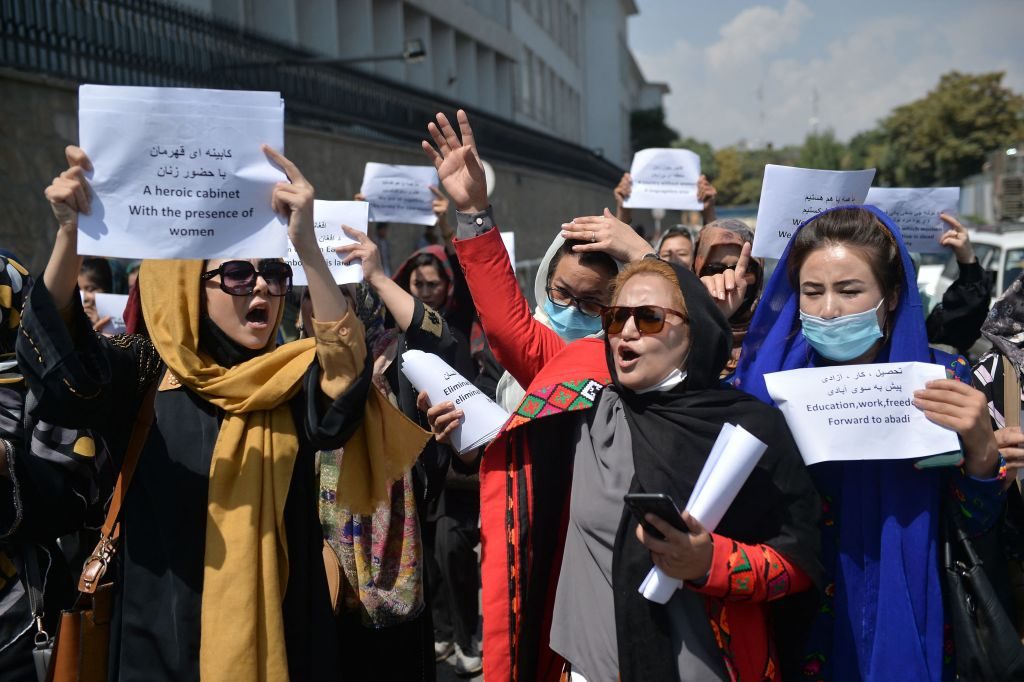 Afghan women take part in a protest march for their rights under the Taliban rule in the downtown area of Kabul on September 3, 2021. (HOSHANG HASHIMI/AFP via Getty Images)

The demonstrators were mostly women at first, assembling outside the Pakistani embassy, but a sizable number of men soon joined in. When the march reached central Kabul, the Taliban attacked with whips, clubs, and rifle butts. Windows were shattered by gunfire, but no fatalities had been reported as of Tuesday morning.

The Associated Press reported journalists covering the event were harassed, assaulted, and detained by Taliban goons:

In one case, Taliban waving Kalashnikov rifles took a microphone from a journalist and began beating him with it, breaking the microphone. The journalist was later handcuffed and detained for several hours.

“This is the third time I have been beaten by the Taliban covering protests,” he told The Associated Press on condition he not be identified because he was afraid of retaliation. “I won’t go again to cover a demonstration. It’s too difficult for me.”

An Afghan journalist named Wahid Ahmadi was detained by the Taliban for several hours, along with his equipment:

TOLOnews cameraperson Wahid Ahmadi was released after being detained for nearly three hours by the Taliban. His camera–with its footage of the protests he was covering–has been returned.#TOLOnews pic.twitter.com/lwB7aEReEZ

The Taliban also used violence to break up a female-led protest on Saturday. Organizers of the Tuesday march who spoke with foreign journalists said they were aware of the risks but were determined to speak out.

Soon after the protest was dispersed, a “bearded Taliban official who was released from Bagram prison in mid-August” told the WSJ he was unaware of any demonstrators on the streets of Kabul on Tuesday morning.

“In all of Afghanistan, everyone is happy, and the situation is better day by day. All the people of Afghanistan want this government,” the Taliban official declared, flanked by “several pickup trucks with Taliban fighters, white bandannas with the Islamic profession of faith on their foreheads,” ready to take action against anyone who seemed insufficiently happy.