“The case against Israel is a case against Jews,” Breitbart News Senior Editor-at-Large Joel Pollak remarked while reflecting on the 20-year anniversary of the World Conference Against Racism, a 2001 U.N. event held in Durban, South Africa.

Pollak spoke on Sunday with Anne Bayefsky, a Canadian lawyer and senior editor at Human Rights Voices, about his observations at the Durban conference, which he attended as a freelance reporter.

He recalled how the event, ostensibly dedicated to addressing “racism” as per its title, focused on framing Zionism — the movement for Jewish self-determination via statehood in Israel — as a form of “racism.” Its organizers and participants sought to implicate Jewish support for Zionism as an accessory to “apartheid” in Israel.

“The narrative coming out of Durban was intended to be entirely that Israel was the new apartheid state,” Pollak stated. “But worse than that, that Jews — through their sentimental attachments to Israel — were aiding and abetting apartheid. There was an effort by Islamist organizations [to] describe Israel as being offensive to Jews. To that end, they enlisted the help of Neturei Karta, which is a fringe organization of ultra-orthodox Jews who reject the existence of the state of Israel.”

Neturei Karta members, who oppose the existence of a Jewish state on religious and theological ground, were used as political props by Islamist groups attending the Durban conference to characterize Israel as violative of Judaism. Inclusion in Neturei Karta in anti-Israel demonstrations was used as a shield against identification of antisemitism as integral to the demonstrators’ ideology.

He continued, “They sent three or four guys who dressed in black coats and black hats — which are recognized by the outside world as sort of stereotypical Jewish garb — I’m an observant Jew [and] I don’t dress like that, there are other Jews who do it, it doesn’t necessarily mean anything about your political views — but they brought these Jews in to attack and demonize Israel.”

“They made sure that [Neturei Karta] guys were in front of every anti-Israel demonstration,” he remembered. “The international media loved it. They photographed these stereotypical Jewish characters in front of signs saying things like, ‘Real Jews reject Israel,’ and that became part of the narrative.”

Jews demonstrate at an non-governmental organization protest rally against Israel ahead of the upcoming conference against racism in Durban, South Africa Wednesday, Aug. 29, 2001. However, it has already been marked by controversy over efforts to equate Zionism with racism and demands for Western governments to pay reparations for slavery and colonialism. (AP Photo/Themba Hadebe)

Pollak reflected on the centrality of his experiences at the Durban conference to his political realignment from the left to the right as he described the widespread presence of antisemitic imagery, messaging, signs, and paraphernalia at the event:

Another shocking thing that happened around the same time was  I was sitting with my American colleagues from [the left-wing magazine] ColorLines. I pointed to one of the posters that had a Star of David dripping with blood, and I was trying to point out that I found this antisemitic, and I’ll never forget the response.

One of the editors told me that it wasn’t antisemitic, that the Star of David was a national symbol, and it was Israel’s own fault if people used it in nasty depictions of Israel, because they put a religious symbol on their flag. That’s what you can expect if you put a religious symbol of on your flag. Of course nobody would have thought to do that to the Turkish flag or even to the Union Jack or any flag that has any kind of cross on it.

This was specifically an antisemitic symbol, and my colleagues from the United States couldn’t see that.

[In the Durban Conference], there just was no concern whatsoever for Jews within the framework of [a discussion of Palestinian statehood], and it began for me a long process of questioning some of my views on the left, and I became much more conservative over time, but whether your views are left-wing or right-wing on any other political issue or in any other context, what Durban really settles once and forever more is that the case against Israel is a case against Jews. It’s a case that has no room for the protection of Jews for the existence of Jews. 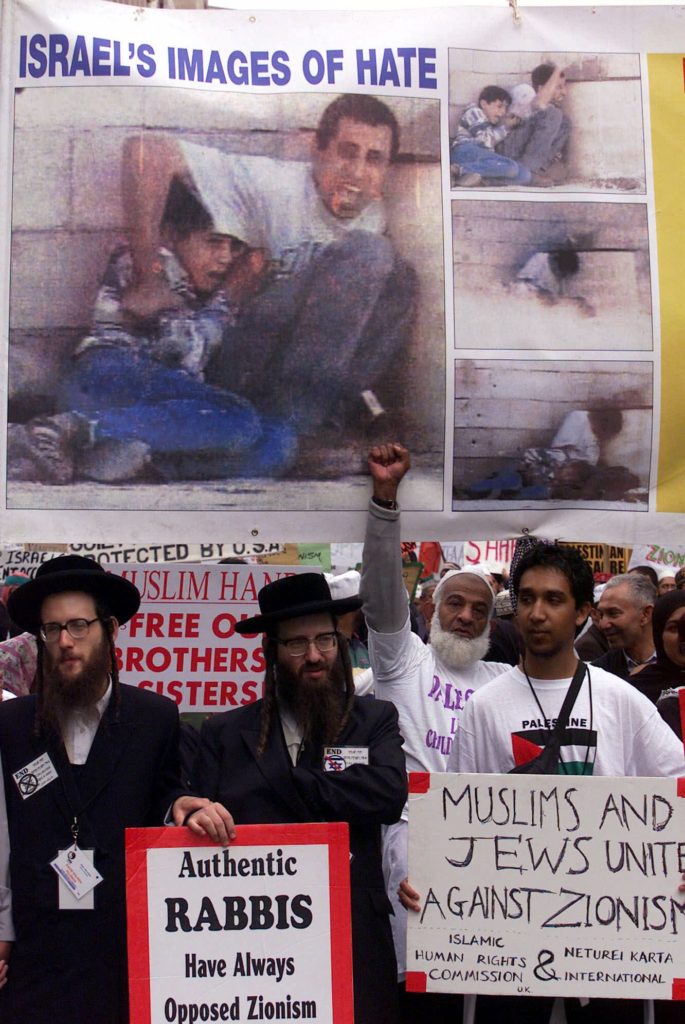 Orthodox Jews and pro-Palestinian supporters participate in a protest march in Durban, South Africa, Friday Aug. 31, 2001 to coincide with the opening of the UN Racism Conference. The series of photographs on the banner show Mohammed Aldura, 12, crouching with his father Jamal Aldura during clashes with Israeli forces in September 2000. Mohammed was fatally shot during the gun battle which was captured on video. (AP Photo/Karel Prinsloo)

Hostility to Jewish national independence through the state of Israel is inseparable from antisemitism, Pollak maintained:

I still have very close connections with friends in the Muslim community, but the anti-Israel movement has no place for those kinds of ordinary interactions. You have to give up your willingness to exist as a Jew — as a free person — if you want to participate in any way in their dialogue, and that’s just a price that we should never be asked to pay again, but that’s what’s being demanded of us, and that’s why the Durban Conference continues to be a travesty.

It’s a travesty that the United Nations continues to commemorate that event as if it’s something to be proud of. It’s something that should be mourned the way the Olympic Committee mourns the 1972 Munich massacre of Israeli athletes.  This is a dark stain on the history of the United Nations, and to the extent that we commemorate Durban, we should commemorate the bravery of the activists who actually stood up against antisemitic hatred, who stood for real solutions to racism, the people who came there with good intentions, the people who with bravely opposed some of this horrible rhetoric that was being circulated and condoned by the United Nations.

He concluded, “What we should celebrate [is] the bravery of the people in that room on Friday night and the solidarity of some of the African-American activists who stood with us, but the World Conference Against Racism was and remains a disgrace.”