Chinese state media reported on Sunday that the big Lunar New Year holiday week was a smashing success at theaters, which reported a huge surge in profits following the termination of coronavirus lockdown policies.

China’s state-run Global Times tallied up over $265 million in movie ticket sales for the week that ended on Sunday. Lunar New Year, or the “Spring Festival,” is traditionally a big movie season in China and, now that coronavirus policies have been “optimized,” audiences are apparently coming back.

“The quality of the films during this year’s Spring Festival holidays is better than that of past few years, and the lower ticket prices compared with that of the last Spring Festival period is expected to attract more audiences to the theaters,” analysts told the Global Times.

People visit a traditional Spring Festival flower market which reopens after closure due to the spread of the Covid-19 coronavirus in Guangzhou, in China’s southern Guangdong province on January 20, 2023, ahead of the Lunar New Year of the Rabbit celebrations which falls on January 22. (Photo by STR/AFP via Getty Images)

One quality shared by the big hits of Spring Festival 2023 is that none are dreary, endless propaganda films like the big manufactured “blockbuster” of the pandemic, The Battle at Lake Changjin.

The Chinese Communist Party all but marched audiences into theaters at the end of 2021 to make that chunk of Korean War propaganda into a “historic” box office hit. They also made audiences chew on frozen potatoes to show their sympathy for Chinese soldiers in the war. A sequel was released in 2022 and made into the big hit of the lockdown-addled Spring Festival season.

This year’s fare was led by crowd-pleasing spectacles, comedies, and cartoons for the children:

A total of seven films will hit cinemas during the holidays, and one highlight of the film period is its great variety of genres, covering sci-fi adventure, period suspense, sports drama, comedy and fantasy animation. 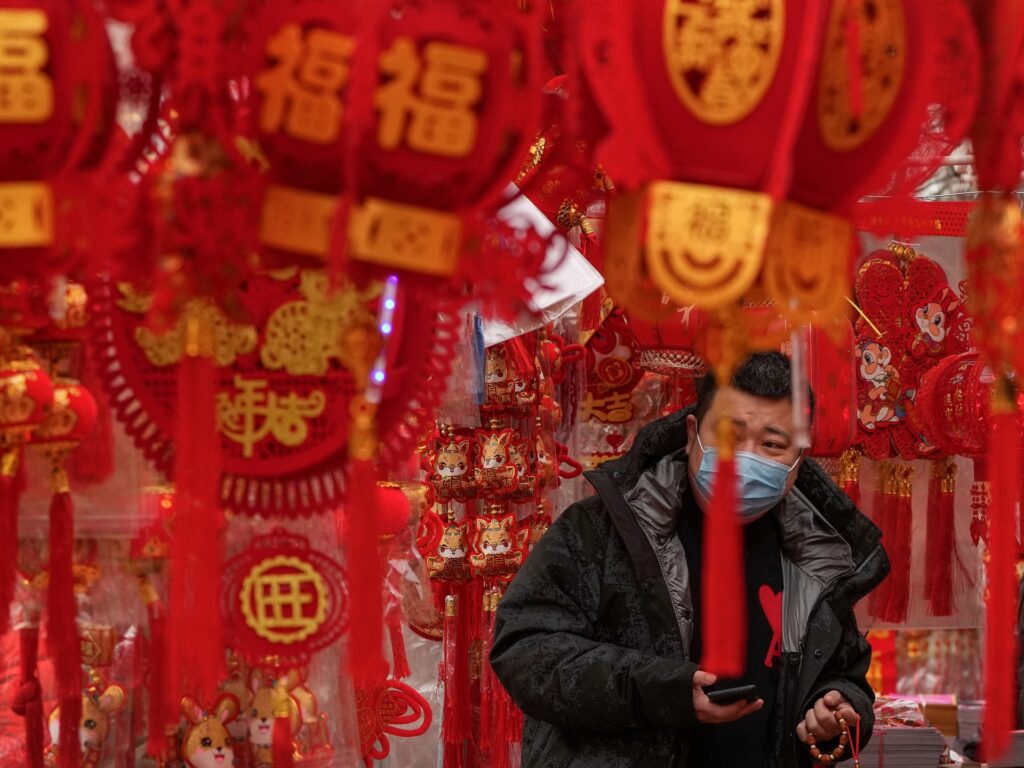 A man wearing a face mask shops for Chinese Lunar New Year decorations at a pavement store in Beijing, Saturday, Jan. 7, 2023. China has suspended or closed the social media accounts of more than 1,000 critics of the government’s policies on the COVID-19 outbreak, as the country moves to further open up. (AP Photo/Andy Wong)

The Wandering Earth 2 is the sequel to a silly but entertaining sci-fi movie about coping with impending planetary disaster by building huge engines on the Earth’s posterior and blasting it off into space, which may make more sense than what the corporate villains of the Avatar movies are trying to accomplish on Pandora.

Full River Red is a murder mystery set in 12th Century China, while Hidden Blade is a spy thriller set in the 1940s starring Tony Leung — the villain from the Marvel film Shang-Chi and the Legend of the Ten Rings — and a boy-band heartthrob named Wang Yibo. Five Hundred Miles is a body-swap comedy, and Ping-Pong of China is a sports comedy.

Nothing on that slate looks like joyless ham-fisted propaganda. Wandering Earth 2 was the biggest winner of the season, having enjoyed an unusually firm release date set long in advance, plus an enthusiastic promotional campaign on social media.

Full River Red was a strong second, buoyed by the reputation of its legendary director Zhang Yimou, who suffered a bout of temporary insanity in 2016 and made a film with Matt Damon but is feeling much better now.