China used massive transport planes to fly hundreds of military personnel into Shanghai on Sunday to assist with a three-day mass coronavirus testing program for the city’s 26 million imprisoned residents.

Fear and discontent are growing as the Shanghai lockdown becomes more severe, with residents complaining they have been locked in their homes without access to food or medicine.

The Shanghai lockdown was originally pitched as a carefully-implemented multi-stage refinement of China’s “dynamic zero-Covid” strategy, with due allowances made for the size and economic importance of the immense city.

Most of that special deference to Shanghai’s unique status dissolved over the weekend, as coronavirus case numbers kept rising, reaching a record high of 13,146 reported cases on Sunday.

As always, coronavirus figures provided by the Chinese Communist government should not be taken at face value, but whatever the true number of infections and deaths might be, local and national officials were clearly willing to admit the situation is getting worse, and they tightened the Shanghai quarantine in response.

Chinese health officials in Jiangsu province, which borders Shanghai, claimed on Sunday that they have discovered a new sub-variant of Omicron dubbed BA.1.1. If the report is confirmed, it would be the first sighting of a new variant found nowhere else in the world.

Workers wearing face masks to help protect from the coronavirus line up to get their throat swab at a coronavirus testing site, Sunday, April 3, 2022, in Beijing. COVID-19 cases in China’s largest city of Shanghai are still rising as millions remain isolated at home under a sweeping lockdown. (AP Photo/Andy Wong)

China’s People’s Liberation Army (PLA) announced on Sunday it has dispatched over 2,000 medical staffers to Shanghai, a response similar to how the outbreak city of Wuhan was handled in the early months of the pandemic. Hospitals from Jiangsu province reportedly sent staffers to Shanghai as well.

The PLA said that with these additional medical workers on-site, Shanghai would be able to complete mass testing within 36 hours. 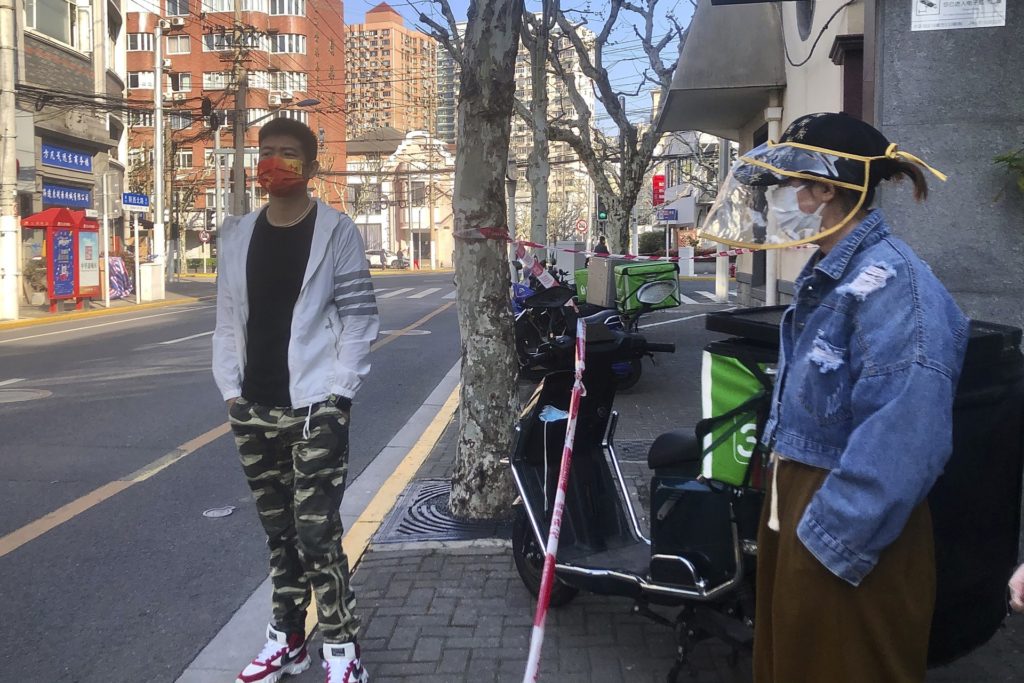 Residents stand along a street during a mass testing day in a lockdown area in the Jingan district of western Shanghai, Monday, April 4, 2022. China has sent more than 10,000 health workers from across the country to Shanghai, including 2,000 military medical staff, as it struggles to stamp out a rapidly spreading COVID-19 outbreak in China’s largest city. (AP Photo/Chen Si)

The city government on Sunday ordered every single resident to perform antigen tests on themselves using home kits and self-report if they tested positive. Police informed citizens they could be arrested and prosecuted if they do not complete all rounds of mandatory testing.

While Chinese state media labored to portray the situation in Shanghai as totally under control, the captive population was singing a different tune on social media. A recorded telephone call went viral on Saturday and prompted a highly unusual grassroots social media campaign demanding clarity and transparency for testing, plus more gentle and compassionate treatment for people with mild or asymptomatic infections. 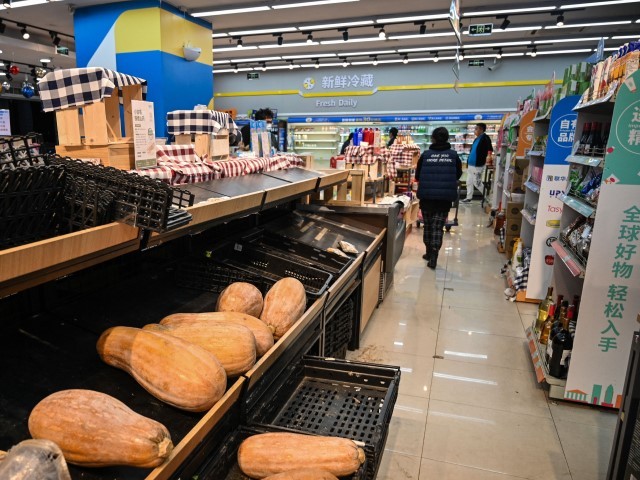 Shoppers rummage through empty shelves in a supermarket before a lockdown as a measure against the Covid-19 coronavirus in Shanghai on March 29, 2022. (HECTOR RETAMAL/AFP via Getty Images)

The phone call recording captured a Shanghai resident telling a local health official his father tested negative, but the official insisted the father would have to be quarantined.

Another viral video showed toddlers separated from their parents and stuffed into overcrowded quarantine facilities with inadequate adult supervision. The post was deleted by censors on Saturday night, but not before the images and video had been shared thousands of times.

On Monday, diplomats from over 30 countries sent a letter to the Chinese Foreign Ministry expressing concerns about the treatment of quarantined children in Shanghai and asking that “under no circumstances should parents and children be separated.”

The British embassy to China sent a separate letter of concern about the treatment of quarantined children and the generally poor conditions in Shanghai’s hastily-deployed mobile coronavirus hospitals.

“The British Consulate-General in Shanghai has been raising its concerns about various aspects of the current COVID policies in relation to all British Nationals in China, with the relevant Chinese authorities,” a spokesperson said.

Chinese health officials on Monday insisted they will continue separating children under seven years old from their parents if the children test positive, even if they have no visible symptoms.

Residents on social media said online grocery stores had run out of food while others complained that they could not buy their regular medication. “Who can tell me how to get medicine? I am so hopeless. I want to leave Shanghai,” said one resident.

Some Shanghainese, who have been unable to leave their homes for more than two weeks owing to restrictions that predated the lockdown because of positive cases in their buildings, have relied on government grocery deliveries.

Shanghai social media users responded to empty store shelves and out-of-inventory delivery services by posting photos of simple vegetable staples dressed up with Gucci and Louis Vuitton packaging as if they were high-end luxury goods. Vegetable emojis are flooding Shanghai chat channels and live streams. Other users have posted photos and videos that suggest a thriving black market for groceries has appeared in the city.

Rep. Byron Donalds to Newsmax: Biden ‘Not a Leader’

Spending Mindlessly On Ukraine Is A Threat To U.S. National Security