The nation’s pro-migration border chief wants a bigger fleet of buses and aircraft to quietly control the delivery of many economic migrants to their preferred cities, according to the New York Times.

The demand comes from Cuban-born Alejandra Mayorkas, the pro-migration zealot who runs the Department of Homeland Security for President Joe Biden.

His plan was revealed amid the establishment media’s uproar over two GOP governors’ public transport of illegal migrants to the Vice President’s House in Washington, DC, and to the elite island resort of Martha’s Vinyard, off Massachusetts.

Mayorkas’ busing plan would block those dramatic GOP drop-offs by corraling the migrants under federal supervision until they are delivered to their preferred cities by agency-controlled buses and aircraft.

[Mayorkas’] Homeland Security Department has been pressing the White House for months to adopt a plan that would allow Immigration and Customs Enforcement to transport immigrants released at the southern border to the cities where they wish to wait for their immigration court proceedings.

On Thursday afternoon, hours after the migrants were deposited outside the vice president’s home, ICE sent another proposal to the White House: to transport migrants apprehended and screened by the Border Patrol to cities where they have family or other sponsors, such as Miami or Los Angeles, according to a document obtained by The New York Times. There, immigration officials would finish [emphasis added] the paperwork and processing necessary to release them to await their day in court.

The plan would also involve coordinating with [government-funded] nonprofit organizations ahead of time so that they are aware of pending arrivals.

Those aides support the Mayorkas-run migration. But they are also concerned about political damage if the public realizes that the government is transporting many poor migrants to their towns and schools.

So far, Mayorkas has minimized the political damage by covertly delivering many migrants without prompting local media coverage.

A man, part of a group of newly arrived immigrants, flashes a thumbs up Wednesday Sept. 14, 2022, in Edgartown, Mass., on Martha’s Vineyard. Florida Gov. Ron DeSantis on Wednesday flew two planes of immigrants to Martha’s Vineyard, escalating a tactic by Republican governors to draw attention to what they consider to be the Biden administration’s failed border policies. (Ray Ewing/Vineyard Gazette via AP)

“The federal government is doing way more flights than [Texas Gov. Greg] Abbott and [Florida Gov. Ron] DeSantis are doing buses and planes,” noted Rosemary Jenks, the director of government relations for NumbersUSA, which works to reduce the large immigration rates into the United States.

“It is just doing it in the dead of night,” she added.

Much of Mayorkas’ nighttime smuggling has been funded by money transferred from various federal programs to contractor-run buses and non-profit shelters.

Mayorkas’ northside smuggling network has hidden the scale and impact of Biden’s migration. For example, a Harvard Harris poll in June 2021 showed that 71 percent of respondents deeply underestimated the monthly flow of migrants into Americans’ jobs, apartments, schools, and culture.

The political risk was exposed in September 2021 when 30,000 or more Haitian migrants congregated at the chaotic Del Rio border crossing. Mayorkas was unable to disperse the migrants before the TV networks showed the chaos, and damaged Biden’s poll ratings.

On September 15, progressives competed with each other to display their outrage after Florida Gov. Ron DeSantis openly delivered about 50 migrants to the island on September 14, where former President Barack Obama has a home. The outrage spiked when Texas Gov. Greg Abbott openly transported about 80 migrants to Kamala Harris’s official home in D.C. on the following morning, September 15.

In the press briefing, tried to divert establishment coverage of the migration by declaring the GOP’s transports are a “cruel … stunt.” 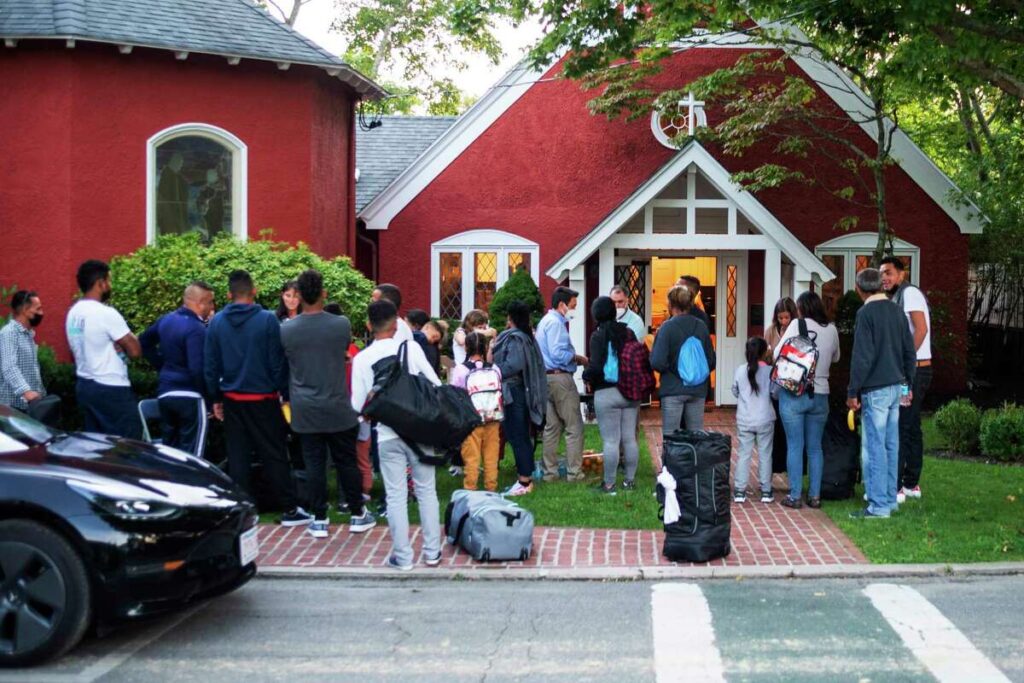 He is asking Congress to provide him with billions of additional dollars to keep the northside smuggling network operational.

The request is part of a budget request — a “Short-term Continuing Resolution” — sent by the White House to Congress. The document asks Congress to spend billions of dollars on Democratic priorities, including $11.7 billion for Ukraine and more funds to run the federal government’s off-the-books migration network.

GOP Senators may covertly approve the funding in exchange for varied concessions from the Democrats.

Since Biden’s inauguration, his deputies have allowed at least three million migrants to cross the southern border in search of jobs and housing.

A whopping 4.9 million illegal immigrants have crossed our border since Biden has taken office, a report from the Federation for American Immigration Reform (FAIR) found. https://t.co/Oouk9xkrs7

That huge economic shock — when combined with the inflow of legal immigrants and visa workers — has delivered roughly one migrant for every two Americans who turned 18 in 2021 and 2022.

The political damage to Democrats from the migration has also been contained largely by the GOP’s pro-migration business donors. The donors threaten any GOP candidates who want to spotlight the pocketbook damage of migration and also pressure them to talk about non-economic “chaos,” drugs, crime, and migrants’ suffering.

To be persuasive in politics, “you have to personalize it for people,” countered Jenks. She continued:

Why is an open border bad for me? Republicans could be so easily showing that.

Amid the GOP’s refusal to tout the pocketbook damage of Biden’s migration, the GOP only has about 50 percent trust among voters about the immigration and border issues. For example, a Wall Street Journal poll in August showed only that 49 percent of registered voters trust the GOP to secure the border. Twenty-four percent answered “Both Equally” or “Neither.”

Some GOP leaders are taking very small steps to spotlight the economic impact on voters.

It is easier for government officials to grow the economy by importing people than by growing exports, productivity, or the birth rate.

So the federal government officially — and unofficially — extracts millions of migrants from poor countries and uses them as extra workers, consumers, and renters.

This extraction migration policy both grows and skews the national economy — but it prevents tight labor markets, and so it shifts vast wealth from ordinary people to investors, billionaires, and Wall Street.

Many polls show the public wants to welcome some immigrants. But the polls also show deep and broad public opposition to labor migration and the inflow of temporary contract workers into jobs needed by U.S. graduates.

This “Third Rail” opposition to the government’s extraction migration policy is growing, anti-establishment, multiracial, cross-sex, non-racist, and class-based. The opposition is bipartisan, rational, persistent, and recognizes the solidarity that American citizens owe to one another.