Department of Education Secretary Miguel Cardona will continue targeting governors who have fought back against school mask mandates, warning Wednesday he plans to conduct “civil rights investigations” and take possible legal action against states with bans or limitations on the mandates.

Cardona said he finds it “astonishing” that some states — such as Florida and Texas — are defying the Centers for Disease Control and Prevention’s (CDC) mask guidance and that those states could be violating some students’ right to education by creating unsafe learning conditions, according to the New York Times.

“The fact that they’re not adjusting based on the illness, and the outcry from medical experts, is astonishing,” Cardona told the Times. “But we cannot sit around. We have to do everything in our power, including civil rights investigations and even referring matters to the Department of Justice for enforcement if necessary.”

The CDC, per its most updated coronavirus guidance, recommends all teachers and students wear a mask in K–12 schools regardless of vaccination status. The agency cites “new evidence” about the Delta variant as the reason for its mask recommendation.

Cardona plans to send letters to six states “admonishing” governors for actions they have taken to prevent schools from forcing children to wear masks.

DeSantis signed an executive order in July “to protect parents’ freedom to choose whether their children wear masks.” He cited among his reasons for the order the possible “negative health and societal ramifications” of masking children and that children are at a “low risk” of contracting “serious illness due to COVID-19.” Abbott signed a similar order in May.

Most recently, Tennessee Gov. Bill Lee (R) signed an executive order giving parents the ability to opt their children out of any school-imposed mask mandates.

Cardona’s latest effort against the governors comes in response to President Joe Biden, who said during public remarks Wednesday that he was directing Cardona “to take additional steps to protect our children. This includes using all of [Cardona’s] oversight authorities and legal action, if appropriate, against governors who are trying to block and intimidate local school officials and educators.” 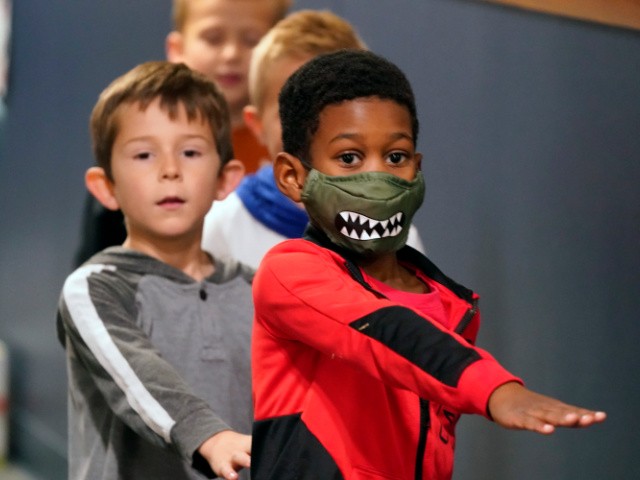 Students waking in the hallway at Tibbals Elementary School place their arms in front as a reminder to socially distance in Murphy, Texas, December 3, 2020. (AP Photo/LM Otero)

Biden during his comments also attacked “some politicians” for “trying to turn public safety measures — that is, children wearing masks in school — into political disputes for their own political gain.”

The president said, “We’re not going to sit by as governors try to block and intimidate educators who are protecting our children.”

The Times observed that the “most vulnerable students, namely students with disabilities, low-income students and students of color” were the most negatively impacted by virtual learning and added that “their disproportionate disengagement has long drawn concern from education leaders and civil rights watchdogs.”

The outlet referenced in its report both Section 504 of the Rehabilitation Act of 1973, which states students with disabilities are entitled to public education, and Title VI of the Civil Rights Act of 1964, which prohibits racial discrimination.

Write to Ashley Oliver at aoliver@breitbart.com.