While we’ve been reporting a lot on Portland and Seattle, there are also multiple other cities across the country where BLM/Antifa have cells where they are also causing trouble.

On Saturday, there was rioting in Denver, Colorado with BLM/Antifa was rampaging throughout the streets, breaking out windows and attacking the police with explosives. They claimed it was a ‘protest’ calling for abolition of the police. But their very actions show why the police are so desperately needed.

Someone with a hand axe broke a window at a building across from DPD headquarters. A resident who says she lives in the building came down and yelled at them to stop. “This is not productive” #9News pic.twitter.com/ErgOZttBFT

Riot police have cleared the intersection outside DPD headquarters. One officer came out with a fire extinguisher. Protesters had set an American flag on fire #9News pic.twitter.com/Cr3JLBTmIg

Police put out another fire set in the middle of the road. The backdrop is the Denver city county building. The group breaking windows and setting fires is about 100 people. They’re moving throughout the city without any regard for the law #9News pic.twitter.com/dnhb9ANSFf

Here’s a closer view of the attacks on the cops, with the explosive landing right within the group of cops. “They are going to hurt one of these cops,” you can hear the streamer say. 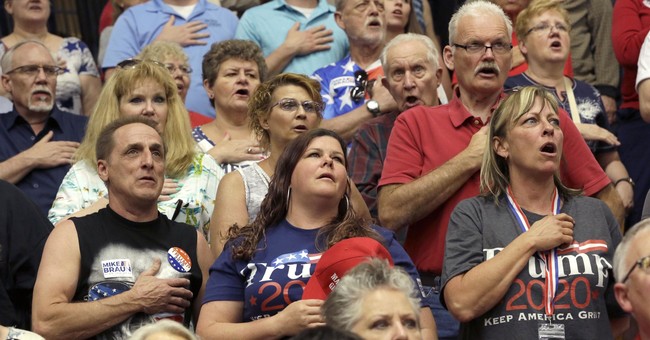 More attacks on the cops, one of the radicals actually threw a bicycle at them.

Wow. Someone just picked up and threw a bicycle at a Denver police officer riding by on a motorcycle. I don’t think the officer was injured. DPD arresting the man now. This is getting dangerous. #9News pic.twitter.com/HnHYwFY0Z2

The radical leftists have likely looked at Portland and Seattle. They’ve seen nothing happen to the crazy folks attacking cops there and have felt emboldened. The craziness and the seriousnesss of their actions is spreading. Will Denver have more sense than Portland and Seattle? It’s been turning left but isn’t as far gone as the Antifa-loving Pacific Northwest.

Absolutely shameful what is happening in Denver tonight. We are beginning to see the true agenda for what the media has told us are “mostly peaceful” protestors. It must be addressed. #copolitics

Not only have Democrats not condemned these actions, they’ve encouraged unrest in the streets, praised the BLM and acted as though Antifa doesn’t exist.

SoFi Stadium Isn’t Quite the Eighth Wonder of the World, but It’s Close – RedState

France Tried To Warn U.S. In 2015 That China Kicked Them Out Of Wuhan Lab