Newly released documents from the Federal Bureau of Investigation (FBI) tell of a man that allegedly offered to kill Kobe Bryant’s rape accuser in exchange for money.

The 16-page document was released last week, according to USA Today.

“Bryant is currently a defendant in a highly publicized sexual assault case in Eagle County, Colorado. [REDACTED] included inferences that he could make Bryant’s problem with respect to the sexual assault case go away for a fee,” the documents said on page one.

On page four, the documents showed that the plan was to “solicit $3,000,000 from Bryant.” On page six, the document states that the money was “for the murder of BRYANT’s accuser in a pending sexual assault case in Colorado.”

USA Today added that the man was “not identified, but the man claimed he was from Switzerland and had a California driver’s license.”

EAGLE, CO – OCTOBER 9: Los Angeles Lakers’ basketball player Kobe Bryant makes his way into the Eagle County Justice Center for a preliminary hearing October 9, 2003 in Eagle, Colorado. The hearing will determine if Bryant must stand trial for the sexual assault of a 19-year old woman at a hotel. (Photo by Ed Andrieski-Pool/Getty Images)

A report from the Press-Enterprise identified the man as Patrick Graber, a bodybuilder who lived in a Los Angeles suburb.

Graber was 31 years old and living in an LA suburb when he allegedly tried to collect $1,000,000 payment for the scheme. He was arrested in September 2003 by FBI agents and the Los Angeles County Sheriff’s Department. 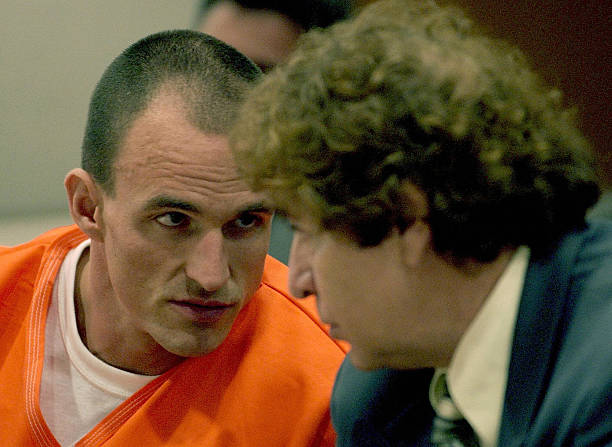 Patrick Graber, (L) talks with his attorney Peter Knecht in Los Angeles County Superior Court, 29 September 2003. Graber, a Swiss body-building coach was charged with offering to kill the woman who accused US basketball superstar Kobe Bryant of rape for three million USD, prosecutors said. Patrick Graber, age 31, was arrested in Los Angeles on 25 September, after allegedly claiming to be a Russian mobster willing to kill the Colorado teenager in order to rid Bryant of his “problem.” Prosecutors returned two criminal charges against the Swiss national, one of solicitation to murder and one count of solicitation to dissuade a witness, Jane Robeson of the Los Angeles district attorney’s office said. Graber’s scheduled arraignment was continued until 06 October 2003. AFP PHOTO/POOL//Nick UT (Photo credit should read NICK UT/AFP via Getty Images)

The probe started after Bryant’s bodyguards received a FedEx envelope with a letter it in describing the plan.

Graber pleaded no contest to grand theft and was sentenced to three years in prison and was subsequently deported after his release.

Bryant was in Vail, Colorado prepping for knee surgery in July 2003 when a woman accused him of raping her in a hotel room. Bryant was arrested but denied raping the woman and the case was dismissed after his accuser said she did not want to testify at trial.

The woman and Bryant settled out of court.