The University of Notre Dame announced on Friday that it has changed its historic fight song played at sporting events to include the word “daughters” rather than just “sons.”

“What though the odds be great or small, old Notre Dame will win over all, while her loyal sons, march on to victory,” the original lyrics read, in part. 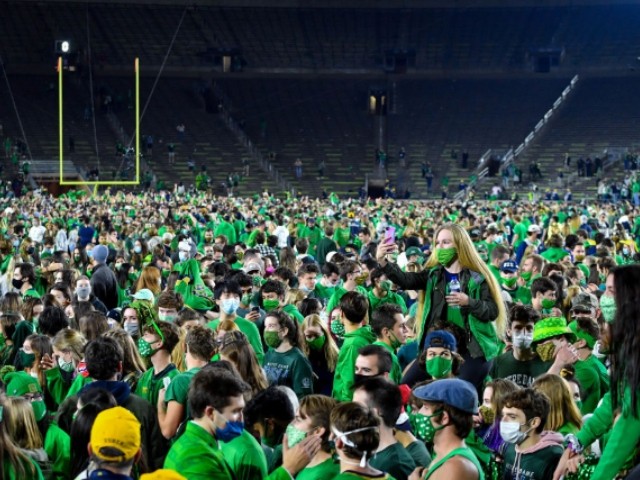 Now, the line mentioning “sons” will include “daughters” as well. The university announced on Friday morning that the change to the lyrics is “official.”

Cheer, cheer for old Notre Dame,
Wake up the echoes cheering her name,
Send a volley cheer on high,
Shake down the thunder from the sky
What though the odds be great or small
Old Notre Dame will win over all,
While her loyal sons & DAUGHTERS
MARCH ON to victory pic.twitter.com/aheZD7cQt1

The university said the change to the song — titled “Notre Dame Victory March” — was made to commemorate the university’s 50th anniversary of allowing the admission of female undergraduate students.

The song was written in 1905, and was first performed on campus on Easter Sunday of 1909, and was later played at Notre Dame sports events starting in 1919.

University President Father John Jenkins added that the song “will now specifically reference both the ‘sons and daughters’ of the University.”

The first public performance of the updated version of the song took place after Father Jenkins’ announcement at the gala dinner.

Girls School Near Nashville Opening Its Doors to Transgender Girls

NRA’s past is irrelevant to its present – Bearing Arms