It’s usually hard to tell when a  television show has run its course. Unless the ratings for that show have crashed 59 percent in the last two years, then it’s really easy to tell that the show is on its way out.

The numbers from the first two episodes of this season’s edition of Hard Knocks are in, and they are completely awful.

According to Sports Media Watch:

The first two episodes of HBO’s ‘Hard Knocks’ averaged 317,000 and 273,000 viewers respectively, up from the corresponding episodes last year (273K and 251K), but dramatically lower than the first two episodes in 2019 (705K and 733K). ‘Hard Knocks’ has now failed to crack the 400,000 viewer mark in eight-straight episodes, compared to zero such episodes in the previous five seasons combined.

Again, as with all sports-related ratings, comparing TV numbers to the first year of the pandemic is a complete waste. Instead, one must compare current numbers to the last “normal” television viewing year to get any real gauge of a show’s popularity. And, obviously, compared to 2019, Hard Knocks is a mess. HBO and NFL executives must be even more upset because this season featured the Dallas Cowboys, a team everyone loves or loves to hate and normally generates big ratings.

LAS VEGAS, NEVADA – SEPTEMBER 19: Raiders fans pose as they gather in a parking lot outside Allegiant Stadium, the USD 2 billion, 65,000-seat home of the Las Vegas Raiders, on September 19, 2020, in Las Vegas, Nevada. The Raiders will play their first game as Las Vegas’ NFL franchise at the glass-domed facility against the New Orleans Saints on September 21, coinciding with the 50th anniversary of the league’s first “Monday Night Football” broadcast. (Photo by Ethan Miller/Getty Images)

If ratings are down 59% with the Cowboys on Hard Knocks, imagine if the Colts or the Broncos had been this year’s team? 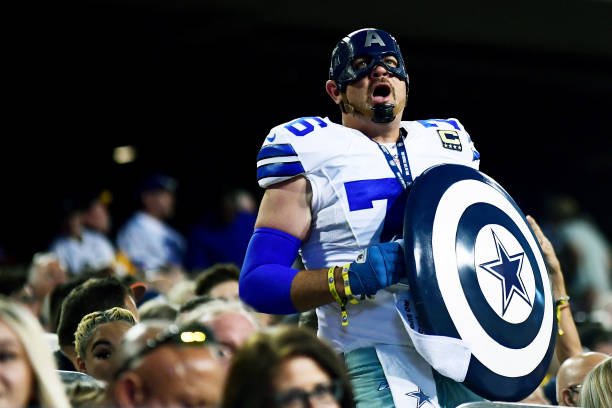 The simple fact of the matter is that Hard Knocks is an outdated television model. The one-time hit HBO series came about in a largely pre-social media era when fans didn’t have instant access to videos and backstories taking place at NFL training camps. With saturation coverage by the media and players who regularly use social media, most of the major storylines Hard Knocks features are already known to fans by the time the show reveals them.

It was a brilliant concept and a revolutionary idea at the time. It’s just not that big of a deal anymore.