Skelly was arrested shortly before 12:30 p.m. on Thursday by police who had blockaded the entrance to his restaurant Adamson Barbecue, located in the Toronto district of Etobicoke, which is currently under a lockdown ordered by Ontario Premier Doug Ford.

Footage of Skelly’s arrest was posted on social media platform Twitter by local broadcaster Newstalk 1010, showing Toronto police officers escorting him away from the restaurant where a crowd of anti-lockdown protestors had also gathered.

BREAKING: Owner Adam Skelly of the Etobicoke barbecue business has been arrested.

Skelly announced the opening of his restaurant in protest of the lockdown measures earlier this week and opened on Tuesday at 11 a.m. Police did not shut down the restaurant on Tuesday, citing public safety fears, City News reported.

On Wednesday Skelly opened his restaurant once again despite being ordered to close by the Medical Officer of Health, Dr Eileen de Villa, who issued a closure of the small business under the Health Protection and Promotion Act.

Ontario Premier Doug Ford expressed sympathy on Tuesday for small business owners across the province and commented on Skelly’s protest, saying, “I don’t condone that he opened up but I feel terrible. My heart breaks for these guys … these business-owners, believe me.”

Ford’s attitude changed Wednesday after Skelly remained defiant, saying, “Buddy, you need to shut down,” and adding, “You’re putting people’s lives in jeopardy. I always try to be nice the first time, but this guy is just totally ignoring public health officials.”

Toronto Police officers walk by a shutdown order on the window of Adamson Barbecue, an Etobicoke business that has defied provincial shutdown orders, on November 25, 2020 in Toronto, Canada. (Photo: COLE BURSTON/AFP via Getty Images)

Ford was joined by Toronto Mayor John Tory who called the protest a “disgrace” and said, “If you ask my opinion as to whether I’d be getting those concrete blocks out of storage right now and going if necessary and putting those in front of Adamson’s or any other place that violates the law in that manner, yes I would.”

On Thursday morning Toronto police had changed the locks of the restaurant in order to prevent Skelly from accessing his own business, with Toronto city spokesman Brad Ross announcing the move.

Despite this, Skelly was able to access the building through a side door that accessed another business in the building, also owned by Skelly. Mr Ross clarified that the city could only change the locks of the restaurant portion of the building. 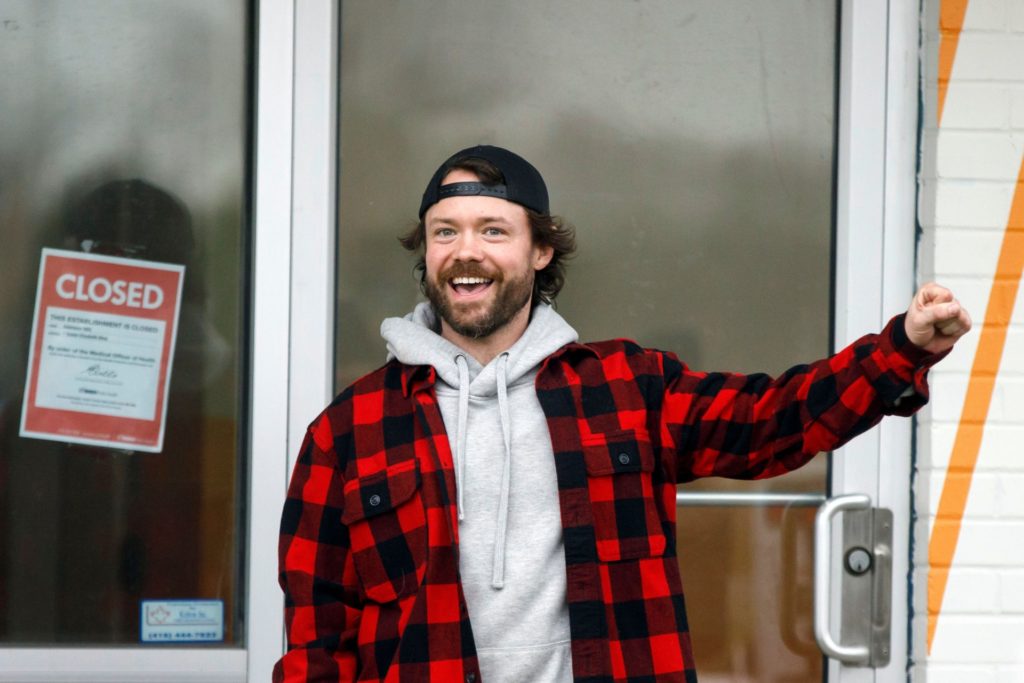 Prior to his arrest on Thursday afternoon, Skelly was charged with nine separate offences, from operating without a licence to holding an illegal gathering.

While many small businesses in the Toronto region and the Peel region have been forced to close their doors due to lockdown, many larger stores, such as Walmart and Costco, have been allowed to remain open by the government.