While on Most Wanted lists in the U.S. for drug trafficking and money laundering charges, the sons of jailed kingpin Joaquin “El Chapo” Guzman are influencing a merchandising campaign throughout Mexico.

In recent days, the Sinaloa Cartel faction known as La Chapiza made international headlines after they took part in a fierce shootout with Mexican military forces trying to prevent the arrest of one of their leaders, Ovidio “El Raton” Guzman Lopez. In response to the capture, La Chapiza laid siege to the city of Culiacan.

Despite their brutality, the Chapizas continue to gain influence each day with a new angle: branded merchandise sold directly and with retail partners.

According to the World Trademark Database since 2010, there have been 27 registrations granted for the name “El Chapo” in Denmark, France, the Philippines, and the USA. In Mexico, there are four records for the drug lord’s name held by his daughter, Alejandrina Gisselle Guzman Salazar.

Thanks to TikTok and other social networks, the Chapitos have positioned their brand on a broad scale. Their logo shows the letters “CHA” followed by a slice of pizza.

Despite not being a registered trademark, items with the La Chapiza logo and brand are already popular through online platforms such as Amazon and Mercado Libre (a Mexican version of eBay). Some of the items include baseball caps, t-shirts, and stickers with the criminal organization’s pizza logo. 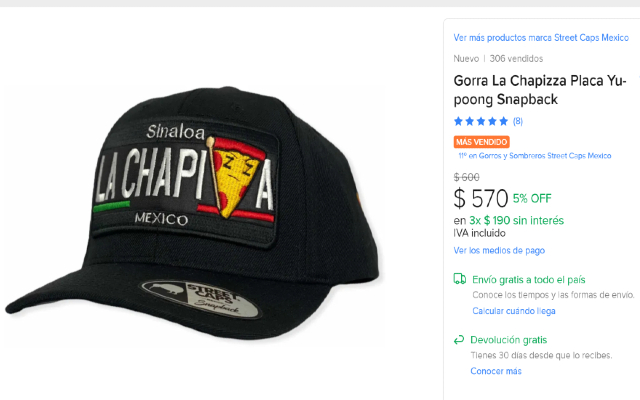 Another interesting item for sale is a cap with the logo for El Raton Special Forces, honoring the crew working under the recently captured Ovidio “El Raton” Guzman. 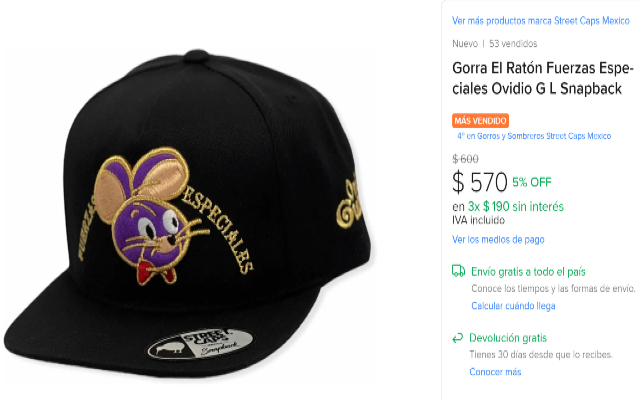 In 2022, videos mentioning “La Chapiza” began to appear on TikTok. Most of the videos showed Sinaloa Cartel gunmen or Chapitos posing with their weapons or patrolling the streets of Sonora.

The gunmen display gold-plated weapons, sports cars, or poppy fields. In December, Insight Crime, which specializes in security issues, published an analysis of La Chapiza’s operations. The schemes were divided into three sections: their internet presence, the use of narco-messages/threats, and tactics of impunity.

-Internet Presence: on TikTok and Instagram there are numerous posts and videos with the hashtag #Chapiza in which they try to position the Chapitos or Chapiza as a new trend displaying a flashy lifestyle filled with weapons, parties, and music. One of the recurring themes on many of the posts is the date October 17, 2019, the date of the first Culiacanazo, which is the day when Mexico’s government released Ovidio Guzman after his cartel invaded Culiacan.

Narco-Messages: The criminal organization has also resorted to the traditional use of messages and threats written on banners or posterboards that they leave next to the bodies of their rivals. In some cases, the narco-messages include texts threatening the public or some authority figure. As Breitbart Texas reported, last month La Chapiza left various banners in the border state of Baja California where they threatened a rival group called Los Rusos. Just a month before, La Chapiza left a similar threat aimed at the Mexican military.

Impunity: another of the traits that differentiate La Chapiza from others is the way they boast on social media about their prowess and impunity due to the lack of response by Mexican authorities over fears that it could trigger new violence such as in the first Culiacanazo.

Editor’s Note: Breitbart Texas traveled to Mexico City and the states of Tamaulipas, Coahuila, and Nuevo León to recruit citizen journalists willing to risk their lives and expose the cartels silencing their communities.  The writers would face certain death at the hands of the various cartels that operate in those areas including the Gulf Cartel and Los Zetas if a pseudonym were not used. Breitbart Texas’ Cartel Chronicles are published in both English and in their original Spanish. This article was written by “Dharma Fernández” from Baja California