BEDMINSTER, New Jersey — Former President Donald Trump told Breitbart News exclusively that his successor President Joe Biden’s botched withdrawal from Afghanistan is the “single most embarrassing moment in the history of our country.”

Trump’s comments came in a lengthy and wide-ranging nearly two-hour-long exclusive interview on Wednesday evening at his office at his golf club in northern New Jersey where he has been living and working for the last several months. The interview, which took place before Thursday morning’s horrific terrorist attack in Kabul at Hamid Karzai International Airport — an attack that claimed the lives of 13 American service members and many Afghans, as well as injuring many more — and moments after senior Biden administration officials attempted to downplay the number of American citizens still stranded in Afghanistan more than a week after the Taliban swept back into control across the country.

“Well, the only thing that surprised me is that everybody knew how absolutely stupid this situation in Afghanistan was, that it should have never ever been this way,” Trump said. “Because everybody knows. A child would know, you take the military out last. You get everybody out, then you get all the equipment — you take your $83 billion worth of equipment — then you blow up the bases. And perhaps you stay at, you take a certain area that you may want to keep like Bagram and keep the base Bagram because it’s next to China and Iran. It costs billions and billions of dollars to build. And maybe you keep that for other reasons. But everybody knows that you take your military out last. And they took the military out first.”

President Joe Biden pauses as he listens to a question about the bombings at the Kabul airport that killed at least 12 U.S. service members, from the East Room of the White House, Thursday, Aug. 26, 2021, in Washington. (AP Photo/Evan Vucci)

Biden at a press conference on Thursday again tried to blame Trump for his own failures in Afghanistan, a recurring theme from Biden and his allies as they have struggled to deal with the deepening and quickly worsening crisis in Afghanistan. But Trump noted in this interview that his deal — signed in February 2020 after Trump and his Secretary of State Mike Pompeo negotiated terms with the Taliban and Trump himself as well as Pompeo had meetings with Taliban leader Mullah Abdul Ghani Baradar — led to no American casualties in Afghanistan since it was signed, until Thursday under Biden.

“And the people that I was doing a very good job of dealing with — remember, we haven’t had a soldier killed in a year and a half,” Trump told Breitbart News on Wednesday night. “That was part of — that was a condition. No soldiers were killed — no American soldier was killed.”

Obviously, that all changed on Thursday when Americans were hit with the sobering news that a suicide bomber allegedly affiliated with terrorist group ISIS-K, whom Taliban security officials outside the airport allegedly allowed in, blew himself up, taking more than a dozen American service members with him as well as many Afghans and injuring countless others.

In response to the horrifying news, Trump and former first lady Melania Trump issued a joint statement on Thursday expressing their condolences to the slain service members’ families and their outrage at the utter failures that led to this.

“Melania and I send our deepest condolences to the families of our brilliant and brave Service Members whose duty to the U.S.A. meant so much to them. Our thoughts are also with the families of the innocent civilians who died today in the savage Kabul attack,” the former president said in his statement. “This tragedy should never have been allowed to happen, which makes our grief even deeper and more difficult to understand.”

We are praying for the families and loved ones of the Marine heroes killed in Kabul and for everyone who is suffering during this difficult time.

Trump on Thursday night debuted a direct-to-camera video in which he addresses the Biden failures that led to this crisis and the deep sorrow and loss for the killed U.S. soldiers — and he also addresses veterans who served in Afghanistan, thanking them for their service — during an interview on Fox News host Sean Hannity’s program:

One of the key things that Trump, in his interview with Breitbart News in Bedminster, hammered home was questioning Biden’s capacity for serving as commander in chief and conducting the job of president. Trump has called for Biden to resign, as have many Republicans on Capitol Hill. Once a punchline in Washington, DC, media circles, Biden’s consistent lack of wherewithal now has many questioning if he can even do the job of leading the United States armed forces — one of the duties of the presidency as laid out in the U.S. Constitution.

Asked if Biden is the commander in chief or if someone else is, Trump said he thinks Biden is calling some of the shots.

“But when you have something that’s so obviously stupid, and everybody else goes along with it, he must be to a certain extent calling the shots,” Trump said. “Take a look at what happened. He came up with a plan that’s so crazy, and stupid. And the people can’t be that dumb that they would go to approve it. So he must have said this is what he wants to do, and they went along with it. All he had to do is a similar thing — what I was doing was just taking the military out last, and when everybody is out, when all the equipment is out and everything is gone, and then we just take the military and we wave ‘bye bye.’ Call it a bad experience. And we would have got out with great dignity and we could have even claimed victory. This is a pure loss.” 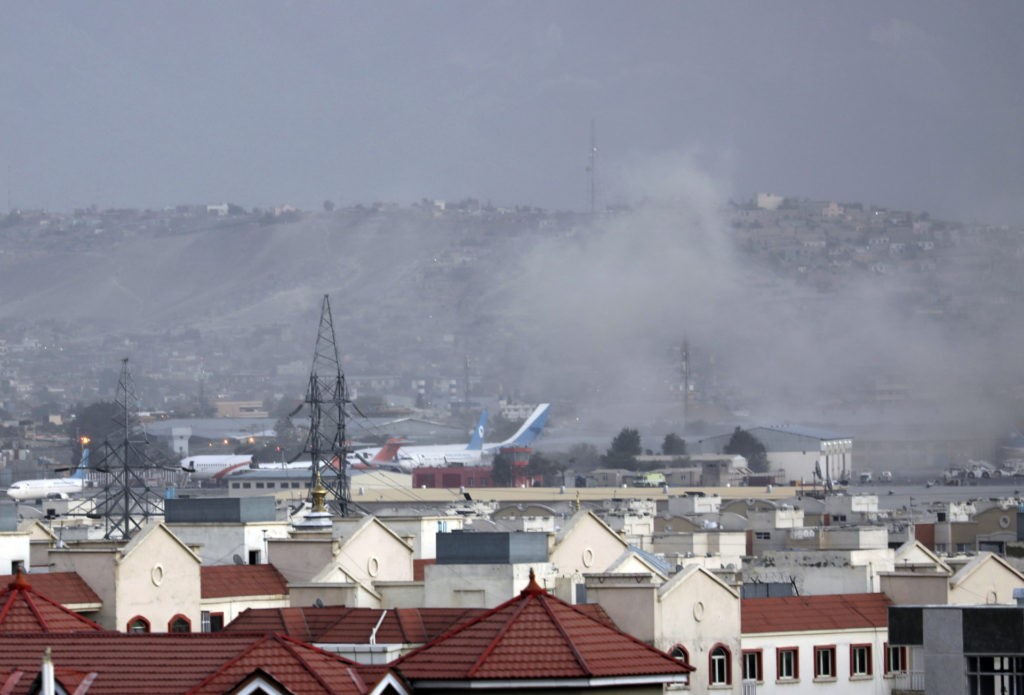 Smoke rises from explosion outside the airport in Kabul, Afghanistan, Thursday, Aug. 26, 2021. The explosion went off outside Kabul’s airport, where thousands of people have flocked as they try to flee the Taliban takeover of Afghanistan. Officials offered no casualty count, but a witness said several people appeared to have been killed or wounded Thursday. (AP Photo/Wali Sabawoon)

Asked at a different part of the interview who is really running the White House, though, Trump said that “nobody really knows.”

Trump’s campaign arm, which operates under the name Save America PAC, released a video heavily suggesting Biden is incapable of serving as commander in chief. The vicious ad ties together much of Biden’s failures, from explosive inflation to the border crisis to Biden’s complete failure to control the coronavirus pandemic. But then the ad centers mostly on this latest complete disaster in Afghanistan and Biden’s inept handling of it — intersplicing images of Biden tripping up the stairs to Air Force One three times with Taliban terrorists taking over Afghanistan.

Trump was moving toward complete withdrawal from Afghanistan this year, too, but he said he would have done it much more effectively than Biden has so far. He said that as soon as the Taliban saw Biden coming into the White House, the barbaric terrorist movement plotted its return to power in Afghanistan and knew Biden would not stop it. Trump specifically mentioned his meeting with Baradar — whom he called by his first name, Abdul — the Taliban leader now in control of Afghanistan. Trump said he conveyed to Baradar that nothing like this would be acceptable while he was president, but the Taliban leaders quickly swept back into power as soon as they sensed Biden’s fecklessness. Trump said, too, that Biden’s weakening of the military — championed also by Defense Secretary Lloyd Austin and Chairman of the Joint Chiefs of Staff Mark Milley, proponents of Critical Race Theory — by pushing “woke” ideology instead of military readiness is a huge part of what has gone wrong here.

“I had that so locked down; we were going to get every — because I was all for getting out of the endless war,” Trump told Breitbart News. “I was for it more than anybody was, and I was doing it. But we had total control of the country. And as soon as the election was rigged, and they won the election — they didn’t win — look, they didn’t win anything. The election was totally rigged. And as soon as these fake results came out, these people started taking over Afghanistan because they were dealing with Biden, not me. They knew — and I dealt with Abdul. I dealt with the whole group; they knew that there would be hell to pay if anything happened like this. But they’ve taken over from our military. I believe it was the single most embarrassing moment in the history of our country, having to do with prestige and having to do with our military. And our military is devastated by it. They look so bad — the wokesters that are running it. I said it very strongly in Alabama. Woke means loser, and that’s exactly what we’ve become.” 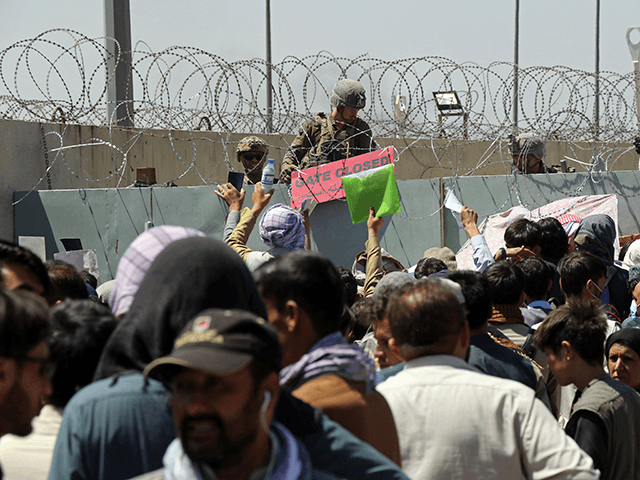 A U.S. soldier holds a sign indicating a gate is closed as hundreds of people gather some holding documents, near an evacuation control checkpoint on the perimeter of the Hamid Karzai International Airport, in Kabul, Afghanistan, Thursday, Aug. 26, 2021. Western nations warned Thursday of a possible attack on Kabul’s airport, where thousands have flocked as they try to flee Taliban-controlled Afghanistan in the waning days of a massive airlift. Britain said an attack could come within hours. (AP Photo/Wali Sabawoon)

Trump also questioned the numbers coming from the Biden administration on how many American citizens are still stranded in Afghanistan. Hours before this interview on Wednesday evening, Biden’s Secretary of State Antony Blinken gave a news conference claiming there were only about 1,500 American citizens still left behind in the country trying to get out. Trump questioned that number from Blinken, saying he has heard reports of 10,000 or even as high as 35,000 stranded American citizens.

When asked if Biden’s actions are an abandonment of the long-held American military credo “no man left behind,” he said Biden has made that “obsolete.”

“Well, I think that the credo is now obsolete because we’re leaving people behind,” Trump said. “We’re leaving equipment behind. And we spent more money on that war, and we’re leaving all this stuff behind. And it’s top of the line. They’re now, they say, the best-serviced soldiers in the world, the Taliban. They have the best equipment, and they have better equipment than our soldiers have.”