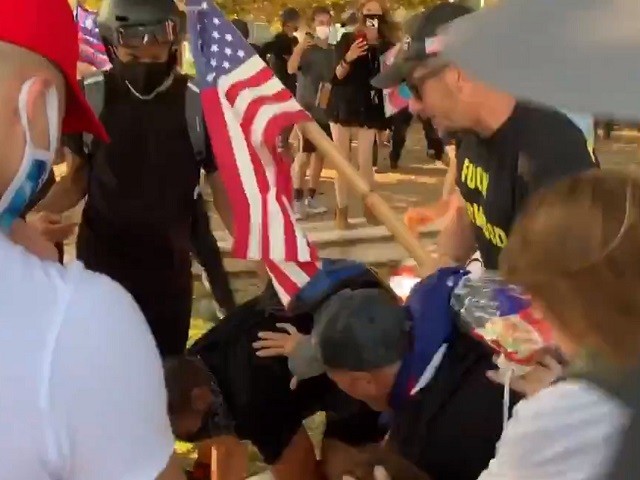 Multiple videos tweeted on Saturday appear to show fights breaking out between Black Lives Matter activists, Antifa, and Trump Supporters, according to observers. In one video, people who appear to be law enforcement can be seen standing back and not intervening to keep the peace.

“BLM activists and Trump supporters are brawling in Beverly Hills,” Human Events managing editor Ian Miles Cheong tweeted along with a video of the incident.

Within a few seconds, police respond and attempt to disperse the crowd with verbal commands over their patrol car PA speaker.

A second tweet shows the pro-Trump supporters who claim BLM/Antifa crossed the street and started fighting.

https://t.co/JP7zZct5UF via @YouTube A pro-#Trump gathering in #BeverlyHills. Trump supporters stop paying attention to counter-protesters, they circled back around. Keep in mind, #BLM and #Antifa were the aggressors. They picked a #fight, they got one. *WARNING: VIOLENT CONTENT*

A third tweet shows a different angle on one of the fights.

There are a lot of fights breaking out at the Beverly Hills protest between Antifa and Trump supporters. pic.twitter.com/ZwD5N7Q4wK

While police appear to have taken no action to stop the fights, officers finally ordered the park cleared.