An insider at Publicis Groupe, one of the world’s biggest advertising and PR companies, exclusively shared screenshots from a “diversity” training day in which employees received instructions by proponents of radical politics of race, which included the corporate wokeness indoctrination such as the idea that the slogan “Make America Great Again” is a form of “covert white supremacy.”

During the online day of training, which the insider described as an “insane Maoist jubilee,” employees received instruction on how to favor people in hiring and promotion on the basis of their skin color, that people who don’t feel guilty about racism have “white privilege,” and were advised to direct company money to far-left causes as part of “corporate social responsibility.”

This news comes as American corporations are in the spotlight over intolerance of Trump supporters, anti-white racism, and embrace of far-left politics. Tire manufacturer Goodyear is currently facing a boycott, encouraged by President Trump, after news emerged that it bans the “Make America Great Again” and “Blue Lives Matter” slogans while allowing “Black Lives Matter.”

The presentations and discussions among left-wing employees trying to “out-woke” each other, provides a snapshot of the radical far-left racism that is spreading across major corporations, in which employees are taught that not to consider people’s skin color in their day-to-day interactions is a form of “white privilege” or even “white supremacy.”

In other messages, employees discussed cutting off clients that don’t meet the demands of far-left politics.

In one of the presentations, the slogan “Make America Great Again” was described as a form of “covert” and “socially acceptable” white supremacy.

The slogan “there’s only one human race” is also included on the list, as well as “all lives matter”, the notion of colorblindness, denial of white privilege, and calling the police on black people. 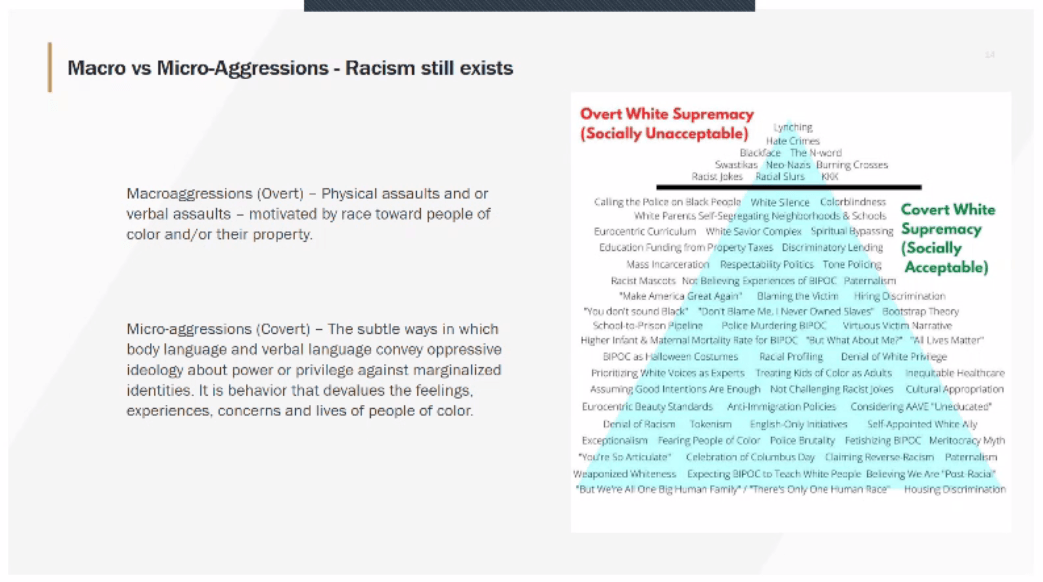 The graphic on “covert white supremacy” appears to be a version of the one that was used in U.S. Army Secretary Ryan McCarthy’s “operation inclusion tour,” which attracted condemnation from lawmakers and sparked an investigation.

Another presentation instructs employees to read the works of left-wing race radicals, including Robin DiAngelo’s White Fragility — which is fast becoming a staple of corporate “diversity” reading lists — and the New York Times‘ 1619 project, which has been widely criticized by historians and helped inspire the vandalizing of a George Washington statue in Portland, Oregon. 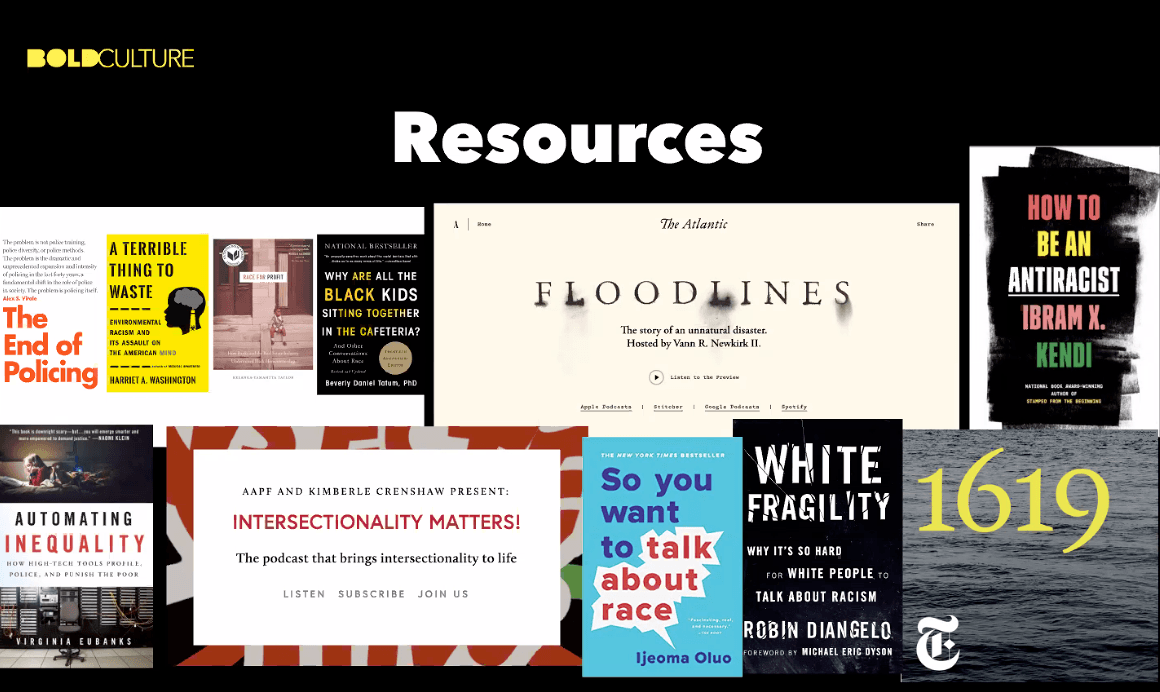 Another slide educates employees on “social dominance theory” and the “oppression matrix,” which ranks you based on the color of your skin, your gender, class, sexual orientation, religion, and other categories. Whites, males, and “gender conforming men and women”  are among the groups described as “privileged.” 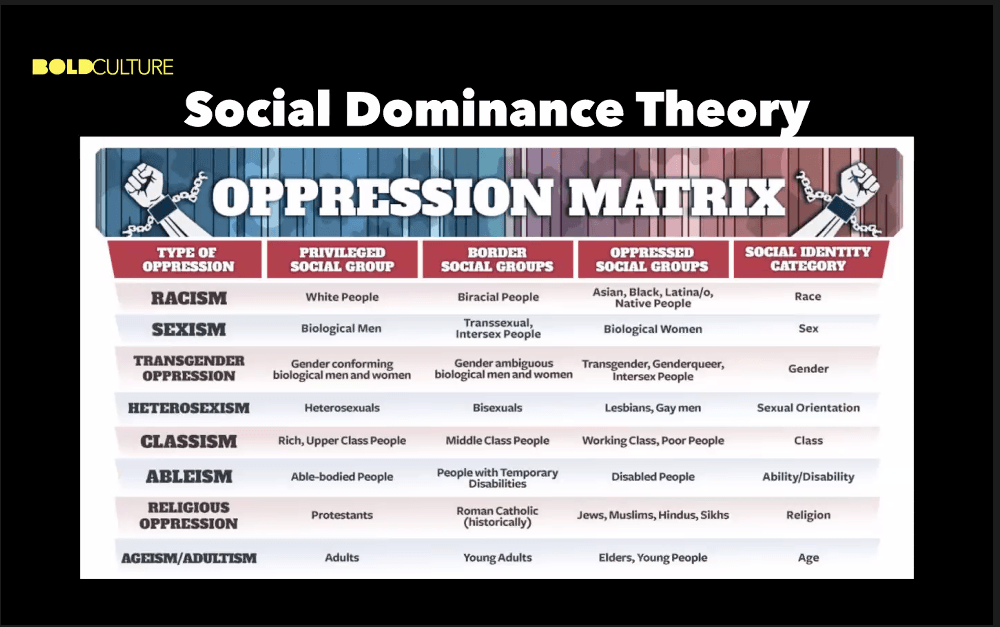 In another slide, employees are instructed on how to “address white supremacy.” Employees are encouraged not to say “all lives matter,” not to “self-victimize” when “called out,” and to distribute wealth based on skin color alone (“support black voices financially.”) 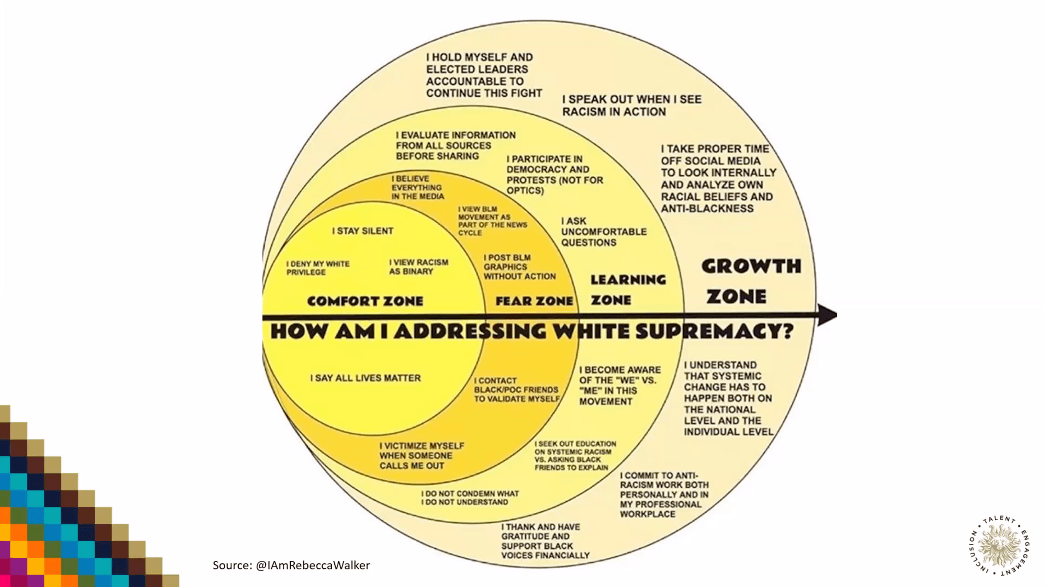 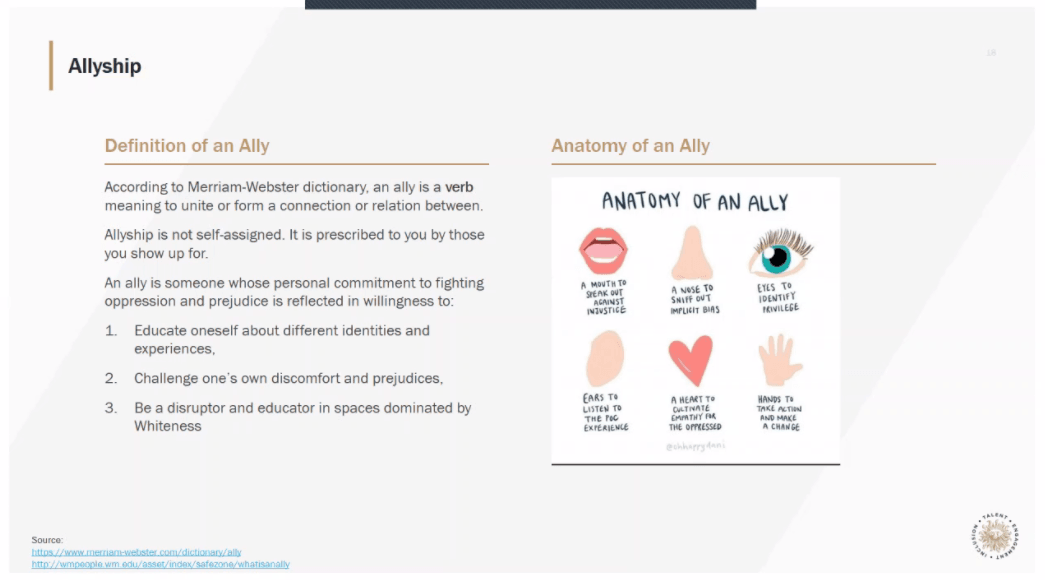 A follow-up slide instructs employees won what kind of public rituals to engage in to demonstrate one’s “allyship.” These include displays of “empathy/grief/outrage,” disregarding “brand”, and “sitting with discomfort.” 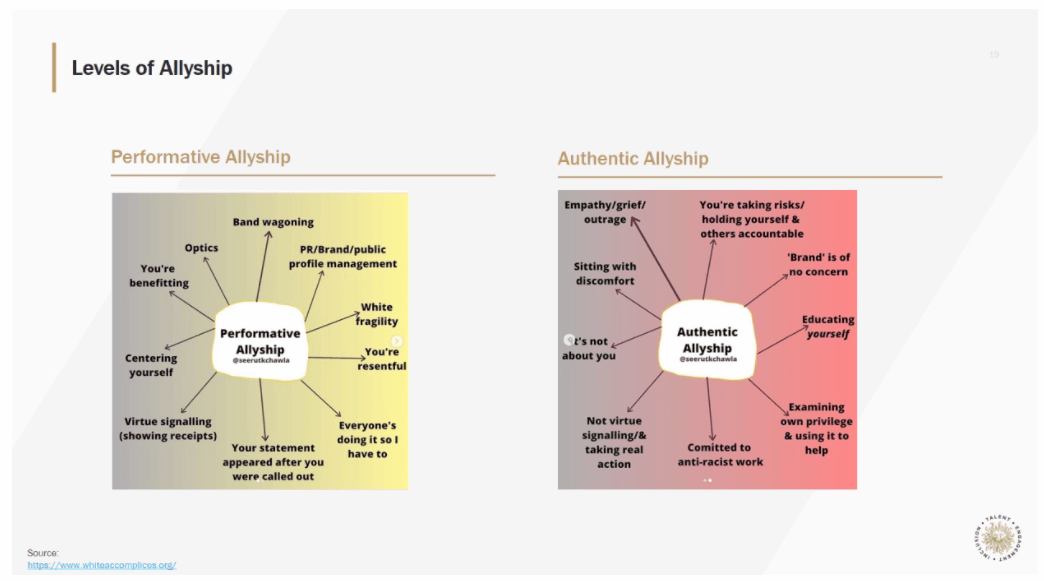 “He brought it with him from Silicon Valley,” the source said of Swinand, who previously worked as a venture capitalist in hyper-leftist San Francisco.

As CEO of Leo Burnett, a Publicis Groupe subsidiary, Swinand has influence over the public image of a range of high-profile corporate clients, including McDonald’s, Coca-Cola, General Motors, Kelloggs, Procter & Gamble, and Pfizer among others.

“I have not seen anyone publicly challenge these statements or policies. I’m afraid to ask anyone I work with, and I have a hunch many people feel similar. It’s just too risky.”

As a result of this climate of fear, no-one challenges the suggestions of far-left employees. Screenshots of internal discussions between Publicis Groupe employees following the presentations show an atmosphere of competution to make the wokest, most far-left suggestions.

In one suggestion, an employee says Publicis Groupe — a vast, multinational corporation with multiple subsidiaries — should refuse to accept business from law enforcement agencies, and pay “reparations” to employees based on the color of their skin.

Another employee in the discussion suggests a corporate boycott of companies that work with prisons. This shows the internal dynamics of the corporate shadow government encouraged by leftist politicians, in which public policy is changed not through the democratic process, but by the arbitrary decisions of corporations driven by far-left pressure, both external and internal.

Along similar lines, another employee says the company should avoid business with any client that “directly or indirectly hurt[s] marginalized communities.”

Anti-police radicalism is a common theme in the discussion, with another employee suggesting the company use its “vast array of employees, tools and skills into a data gathering system” to help far-left activists pressure the police. 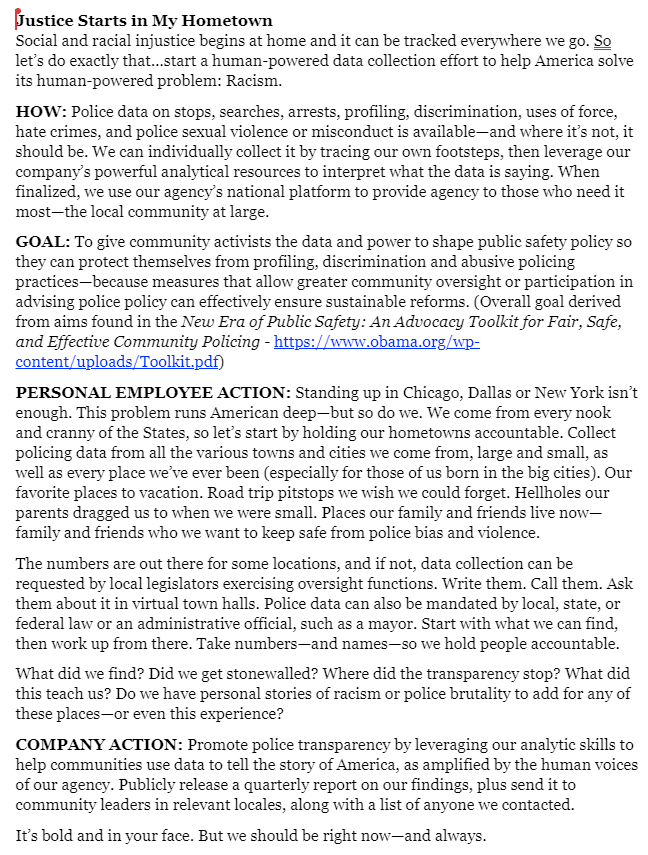 Employees also suggest discrimination on the basis of skin color, including “internship programs that are 100% for people of color” and racial leadership quotas. 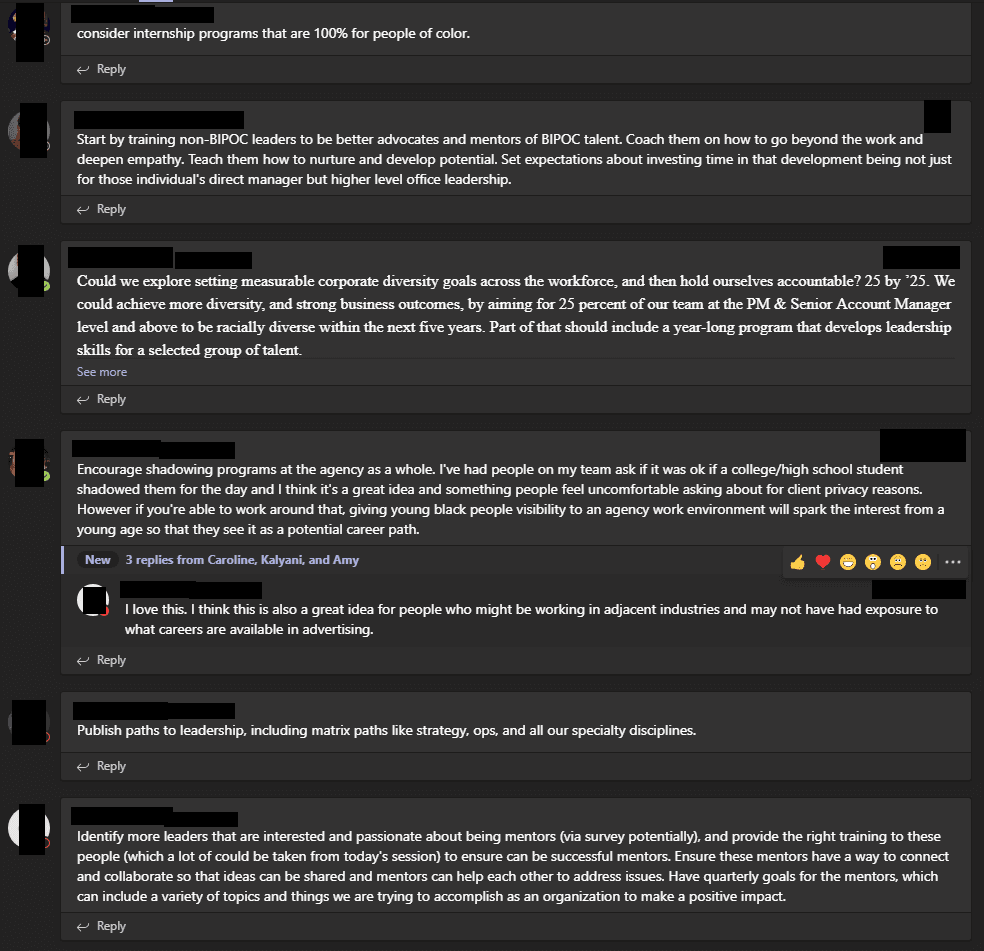 The sight of far-left racial politics in one of the world’s biggest advertising conglomerates may seem alarming, but it is becoming normalized in the culture of American companies.

Two years ago, Breitbart News reported that Google instructed its employees that values such as colorblindness and meritocracy are part of “white dominant culture,” and that the tech giant hosted a talk featuring the author of White Fragility — the handbook on left-wing race radicalism that has exploded in popularity following the George Floyd riots.

With dissenters against progressive orthodoxy harshly punished, few speak out against this movement.

“You can almost tell who isn’t on board with this stuff by their lack of voluntary engagement in these topics of conversations,” said the Publicis Groupe source, but expressed concerns that laying low would no longer suffice.

“Given that the term ‘silence is violence’ has been endorsed by upper management, simply keeping your head down is not going to protect you. It’s wiser to feign support just to avoid being singled out.”

Publicis Groupe did not reply to a Breitbart News request for comment.

Allum Bokhari is the senior technology correspondent at Breitbart News, where he has published material from whistleblowers inside Google, Facebook, YouTube, Twitter, and other major companies. His upcoming book, #DELETED: Big Tech’s Battle to Erase the Trump Movement and Steal The Election can be preordered here.