If you appreciate our work on this hugely consequential issue, please consider contributing.

Time flies when you’re having fun — or having to fight the same battle over and over with the same cussedness and ferocity.

It is, someone reminded us a couple of months ago, the 25th anniversary of NRO. (We aren’t always very good at tracking such details!)

It’s the latter I was thinking about the other day when we were publishing wall-to-wall coverage of the debacle at Del Rio.

Haven’t we’ve been here before, I asked myself? (It was, I readily admit, a rhetorical question.)

The answer, of course, is that we have, over and over.

There are many things that we have been consistent about here for the past 25 years, whether it’s abortion, guns, family, government spending, or our constitutional order.

But immigration is right up there. We have been a reliable and sometimes lonely voice of reason on this issue for a very long time, which is one reason I’d like to ask that you support our 25th-anniversary webathon.

The GOP has obviously taken a more restrictionist attitude on immigration of late, a welcome change in my view.

But it wasn’t always so. We had to fight, with a few allies, a desperate rearguard action against not just one, but two so-called comprehensive immigration bills during the administration of George W. Bush in 2006 and 2007.

Bush isn’t necessarily so popular with Republicans now, but he certainly was back then, and the party was divided on immigration.

Defeating these bills was a near-run thing. I remember talking with then-senator Jeff Sessions, who was, naturally, leading the legislative opposition, and he wasn’t sure that we’d prevail.

But we put our shoulder to the wheel, in a big way. Even I’ve forgotten some of these covers of the magazine in this period:

A lot of Republicans rolled their eyes at this coverage and thought we were crazy or malicious.

If you appreciate a publication that is willing to stick to its guns, even when it might not be popular, I humbly request that you chip in to our latest fundraising drive.

As you can see from those covers, some of our writing was frankly oppositional, while some of it pointed to a better way forward — a balance we try to strike on most issues.

If you think that this approach is important — and can be found very few other places — I, once again, suggest helping us fund more of this kind of work. (I know, I know, I’m a bore on this point!)

As it turns out, those comprehensive bills were indeed stopped. Then Mitt Romney lost in 2012, and a lot of people in the Republican Party concluded, like Christopher Walken in the famous Saturday Night Live skit, that the answer to the GOP’s problem was yet more comprehensive immigration reform.

Once again, we blasted away at the edifice of this foolhardy legislation. And we weren’t afraid to criticize allies while doing it: 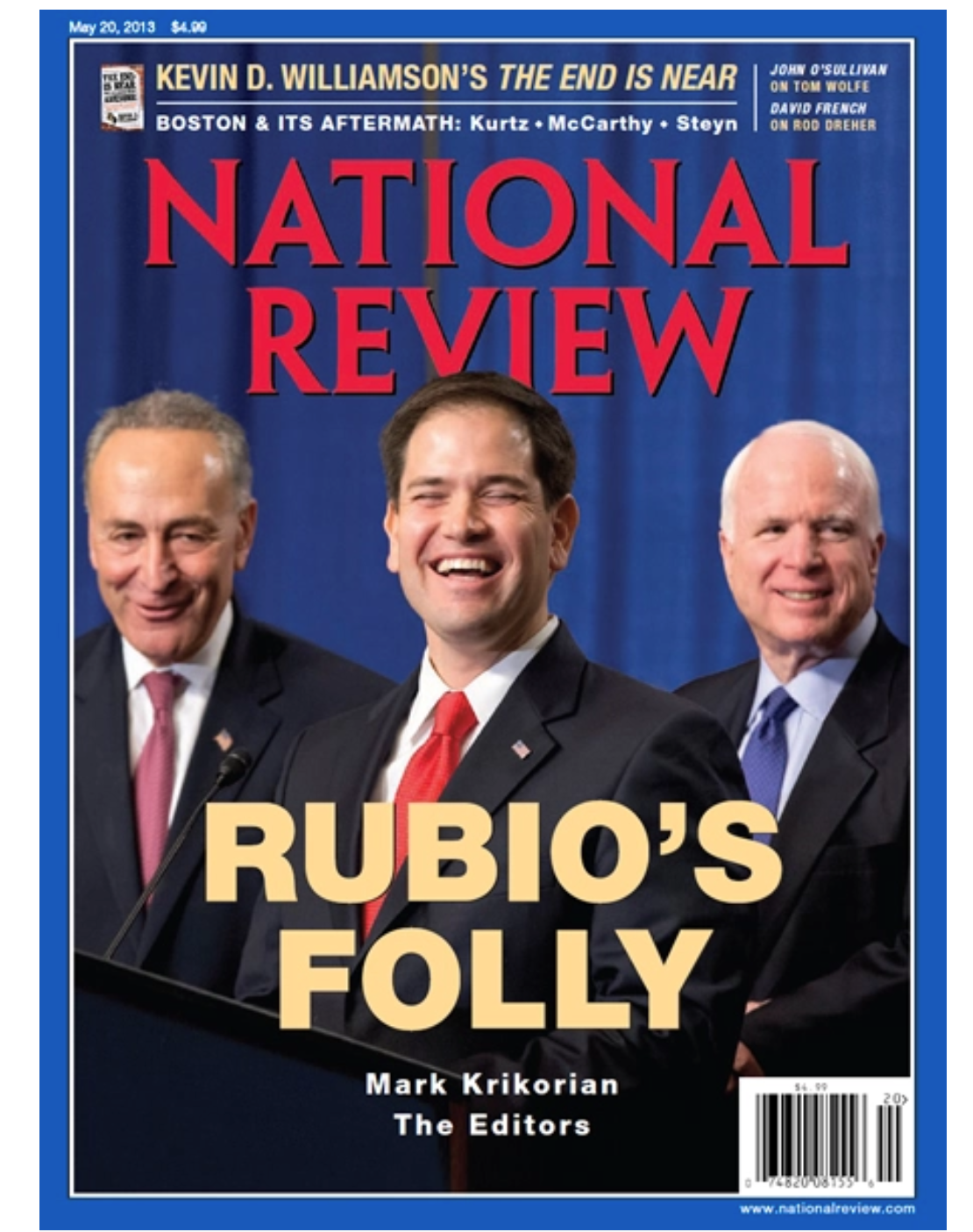 Now, as I mentioned earlier, the GOP is in a different place on immigration, but the same bad ideas are more ascendant in the Democratic Party than ever before.

We’ve been excoriating Biden’s immigration agenda from the beginning and have warned about its radicalism and the risk it would create a border crisis; have picked apart Biden’s lies; have diagnosed his policy failures; and have, more recently, underscored the idiocies that created the situation at Del Rio and denounced the president’s shameless falsehoods about the border agents on horseback.

I submit to you that other journalistic organizations may do better clickbait than us on this issue, but no one is more substantive and credible.

This is yet another I reason I’m hoping you’ll consider giving.

I care about this issue a lot myself and have dug in with a major piece on how Trump got control of the border.

I noted earlier the consistency of NRO on so many things over the years, and one of the most important is our bond with our readers, who aren’t “just” readers but members of our broader community and serious, engaged believers in our common cause.

You come through for us in so many ways, and we can’t do enough to express our gratitude.

If it weren’t for you, we wouldn’t have stood a prayer of surviving and thriving over the past 25 years.

So here I am again, asking for your support. We hope over the next several weeks to get 2,500 donors — get it? — to give $325,000. This is an ambitious goal, but we believe there are enough committed people out there, who appreciate excellent journalism, who know this country needs defending from enemies foreign and domestic, and who prize dogged consistency that we can reach it.

As I always stipulate in these appeals, National Review doesn’t have a sugar daddy and never has, and serious opinion journalism isn’t a lucrative business, unfortunately.

We ask that you contribute really any amount to our drive. Literally every dollar helps, and we welcome $5 donations as well as $1,000 contributions.

On immigration, I hope the debate over it eventually is in a better place. In the meantime, we will be manning the ramparts against folly and self-delusion — just the way we have for the past 25 years.