The Taliban on Monday was reportedly looking for a Washington, D.C., lobbyist to gain legitimacy from President Joe Biden.

“Sign of the times: hearing the Taliban is in the market for a lobbyist in DC, offering a lucrative contract. The narrative around their financial situation, is that they’re broke,” a BBC reporter based in Washington, D.C., tweeted:

Sign of the times: hearing the Taliban is in the market for a lobbyist in DC, offering a lucrative contract. The narrative around their financial situation, is that they’re broke.

“The Taliban says it seeks international legitimacy and international support. And that will depend entirely on what it does, not just on what it says,” Blinken told TOLO News when asked if Biden will recognize the Taliban as a legitimate government. “And the trajectory of its relationship with us and with the rest of the world will depend on its actions.”

While the Taliban have promised to be “inclusive” and tolerant of women’s rights as long as they submit to sharia law, they also appointed an FBI wanted terrorist with a $10 million bounty to be in charge of passport control for Americans and green card holders who remain hostage in the country.

This picture taken on October 8, 2017, shows Afghan school girls looking on as they receive pens and bags from the United Nations Children’s Fund (UNICEF) at a school in Lashkar Gah in Helmand province. (Noor Mohammad/AFP via Getty Images)

Yet the Taliban have been calling “on other countries to recognize their right to rule Afghanistan,” Politico reported. When it comes to the Biden in particular, one Taliban terrorist reportedly stated, “The Islamic Emirate is keen to maintain good diplomatic, economic and trade relations with America on the basis of mutual respect and equality.”

Biden, however, already may be legitimizing the Taliban by allowing the United Nations to give aid to the Afghan people, which is facilitated by the Taliban terrorists in a type of partnership, similar to the one in which the Taliban secured the outer perimeter of the Kabul airport where 13 U.S. troops were killed.

But despite the loss of American life, the Taliban plan to protect the life and property of humanitarian workers and safeguard their compounds while aid is disseminated to the starving Afghan people. 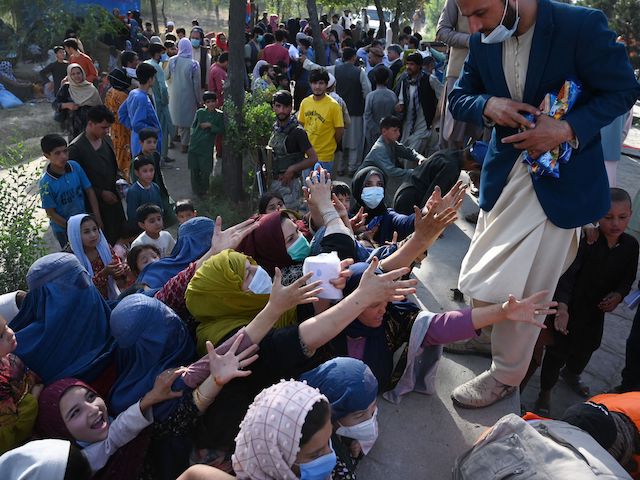 Internally displaced Afghan families, who fled from Kunduz and Takhar province due to battles between Taliban and Afghan security forces, collect food in Kabul on August 9, 2021. (Wakil Kohsar/AFP via Getty Images)

“The Taliban also promised to protect the life and property of humanitarian workers and safeguard their compounds. On Sunday, Taliban authorities sent assurances that they would facilitate humanitarian aid deliveries by road,” U.N.’s Director of Humanitarian and Emergency Relief Operations Martin Griffiths said.

Promises from the terrorist organization come as the “World Bank has halted all funding for new projects,” the “International Monetary Fund has blocked funds designated for Afghanistan,” and Biden has “frozen the assets of Afghanistan’s central bank that are held in the United States.”

It should be noted nearly “100 Americans in Afghanistan” remain hostage to the Taliban since Biden’s deadly evacuation on August 31, Blinken confirmed Monday. Media reports suggest between 100 to 5,000 Americans could still be trapped in the country.