Rob O’Neill, a retired Navy SEAL who took part in the raid that killed Osama bin Laden, said on Friday’s edition of SiriusXM’s Breitbart News Daily with host Alex Marlow that “political correctness” and “woke” ideology contributed to the deaths of 13 U.S. military servicepersons in Afghanistan in suicide bombings during the Biden administration’s withdrawal from the failed state.

“The longer we spend time in a war, the more attorneys and politicians get involved, and if you ever really want to lose something, get politicians involved,” O’Neill said.

The Biden administration prioritized symbolism with its stated withdrawal on the 20th anniversary of the September 11, 2001 attacks over operational security, O’Neill stated.

He said, “We should have pulled out of Afghanistan, no doubt. But we did it the wrong way, and it was rushed because politicians wanted to get that 20th-anniversary celebration of, ‘I ended the war, and here we are 20 years later,’ and they just rushed it, and the reason they rushed it is they’re getting bad advice from advisors.”

O’Neill assessed incompetent advice up the chain of command among military leadership as a function of ambition.

He remarked, “In the military, a junior person doesn’t want to tell his boss the truth, because the truth might not sound like what he wants to hear. Show me a four-star general, I will show you 14 people around him that are all yes men — someone carrying his luggage, all of them kissing his butt — and they’re going to tell him he wants to hear.

O’Neill said generals with poor judgment who are reinforced by bootlicking and sycophantic subordinates relay their poor guidance to politicians. He stated, “[Such a general] wants to either get his political career going, or he wants to get his kick-ass job at a government contract.”

WASHINGTON, DC – JUNE 17: Secretary of Defense Lloyd Austin, left, and Chairman of the Joint Chiefs of Staff Gen. Mark Milley talk before the start of the Senate Appropriations Committee hearing on “A Review of the FY2022 Department of Defense Budget Request’ on June 17, 2021 in Washington, DC. The hearings are to examine proposed budget estimates and justification for fiscal year 2022 for the Department of Defense. (Photo by Caroline Brehman-Pool/Getty Images)

“We got 13 of our soldiers and Marines and a Navy corpsman killed, all because someone wants to get reelected,” he determined. “It’s all about personal power in the Beltway. The beltway is so far out of touch with reality that it’s disgusting.”

O’Neill noted that “woke” ideology and “political correctness” amount to inversions of reality.

“What we’re seeing in the military now, everything from the way they’re training people, this is what happens when you get woke and politically correct to the point of chaos. Up is down, down is up, and people get fired for telling the truth, and it’s wrong,” he remarked.

He warned that prioritization of “wokeness” and “political correctness” comes at the expense of military preparedness. 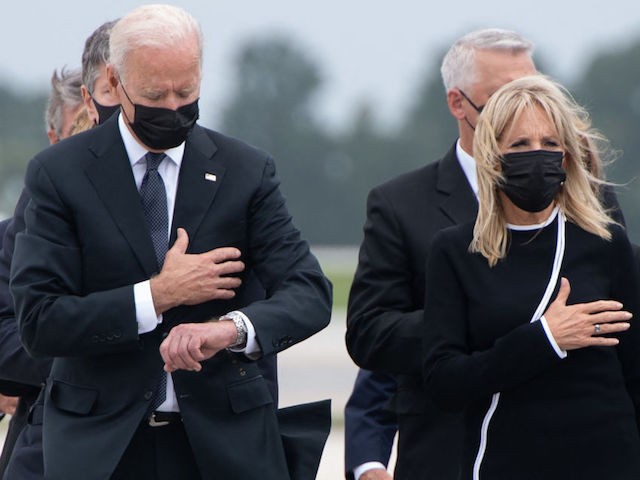 US President Joe Biden looks down alongside First Lady Jill Biden as they attend the dignified transfer of the remains of a fallen service member at Dover Air Force Base in Dover, Delaware, August, 29, 2021, one of the 13 members of the US military killed in Afghanistan last week. – President Joe Biden prepared Sunday at a US military base to receive the remains of the 13 American service members killed in an attack in Kabul, a solemn ritual that comes amid fierce criticism of his handling of the Afghanistan crisis. Biden and his wife, Jill, both wearing black and with black face masks, first met far from the cameras with relatives of the dead in a special family center at Dover Air Force Base in Delaware.The base, on the US East Coast about two hours from Washington, is synonymous with the painful return of service members who have fallen in combat. (Photo by SAUL LOEB/AFP via Getty Images)

He stated, “Do not bring this into the military. Our military should be on the range, sighting their weapons in, getting good at tactics, being in the weight room, staying in shape, and being good to each other [instead of] all of this wokeness.”

He concluded, “I even saw this on 9/12 2001 — a lot of don’t know this — we were calling it Operation Infinite Justice. Someone said, ‘Well, that might offend people,’ so they changed it to Operation Enduring Freedom. You know it’s going to end badly when you start worrying about offending [people]. We’re at a point now with political correctness [where] we get in trouble if we don’t kill people in a nice way.”