While in the West prominent Protestant churches “have been vocal advocates for same-sex marriage and LGBTQ rights,” writes AP, with “only a few exceptions, this hasn’t happened in Africa, where Anglican, Methodist, Presbyterian and Lutheran leaders are among those opposing such inclusion.”

In Ghana, for instance, “leaders of major churches have united in denouncing homosexuality as a ‘perversion,’” and in endorsing harsh anti-LGBTQ legislation, the article states, a position mirrored by Christian denominations around the continent.

Christians throughout Africa overwhelmingly oppose gay marriage and often frame attempts by Westerners to pressure them into accepting it as “cultural imperialism” and “ideological neocolonization.”

In her groundbreaking 2018 work Target Africa: Ideological Neocolonization in the 21st Century, Nigerian biologist and human rights activist Obianuju Ekeocha dedicated an entire chapter to attempts by Western “cultural imperialists who consider themselves ‘our betters’” to impose a pro-homosexual agenda on Africa.

When progressive Westerners “tout the merits of cultural diversity, they mean native languages, food, clothing, music, and dance,” Ekeocha wrote, but “their tolerance of African cultural heritage does not extend to the deepest thoughts and convictions of Africans,” notably in their opposition to same-sex marriage and abortion.

Christian members of the Sozo church of God hold anti-LGBTQ signs and sing against homosexuality after a verdict on scrapping laws criminalising homosexuality in front of the Milimani high court in Nairobi, Kenya, on May 24, 2019. (YASUYOSHI CHIBA/AFP via Getty Images)

“For Africans, ‘male’ and ‘female’ are not fluid concepts,” she asserted. “Sexual differentiation is not an open-ended consideration.”

To convince Africans “that marriage and sex are even possible between two women or two men would require destroying their language and their culture,” she continued. “Such an undertaking is exactly what homosexual activists are attempting in Africa.”

“African nations have been labeled as inherently homophobic by Western media,” she contended.

“But am I a hater for believing that a child should not be subjected to fatherlessness by the choice of two women?” she asked. “Am I a bigot for thinking that it is wrong for homosexuals to exploit poor women through surrogacy?”

Africa’s refusal to surrender to the normalization of homosexuality is more adamant now than it has even been,” she insisted, “because the Western superpowers have rejected sexual differentiation and complementary, heterosexual marriage, and the traditional family as the cornerstone of their societies.”

“The bill has been denounced by human rights activists even as Ghanaian religious leaders rally behind it,” the article declares. 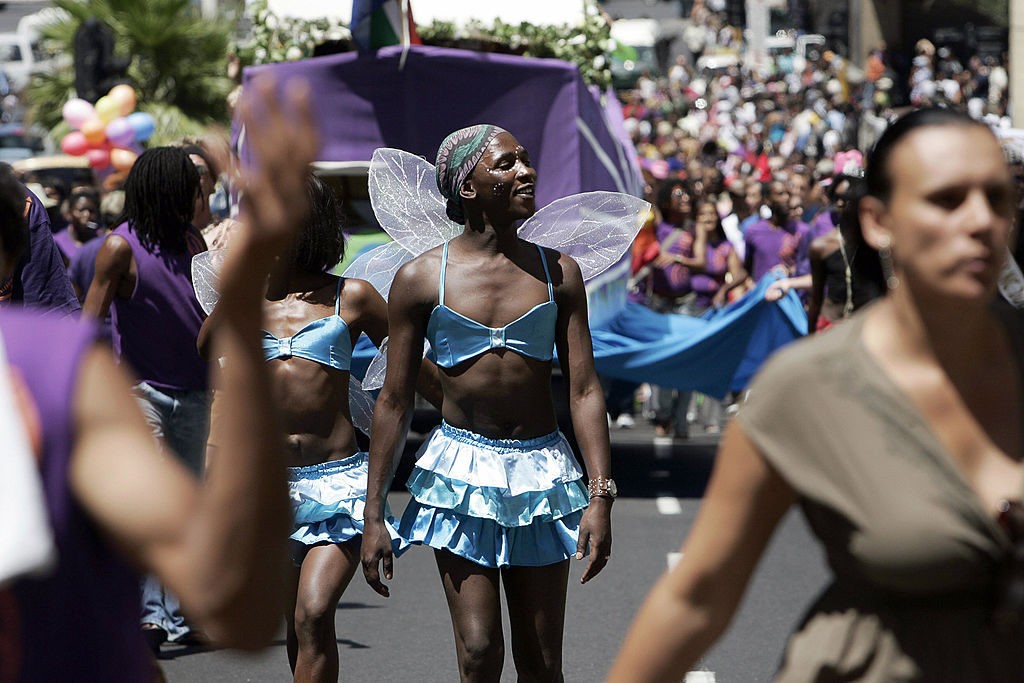 Gays and Lesbians parade, 17 February 2007, in the streets of the Cape Town business district during the Gay Pride parade in Cape Town, South Africa. South Africa was one of the few countries in the world to legalize same sex marriage at the end of 2006. (GIANLUIGI GUERCIA/AFP via Getty Images)

Last February, Ghana’s Catholic Bishops’ Conference (GCBC) came out in full support of the legislation, appealing to the government not to succumb to efforts to impose the LGBT agenda in the African country.

In its statement, the GCBC said that “the rights of homosexuals as persons do not include the right of a man to marry a man or of a woman to marry a woman. For the Church, this is morally wrong and goes against the purpose of marriage.”

The European Union “should not impose their so-called values and beliefs on Ghanaians who are against homosexuality,” adding that “the laws, values and cultural beliefs in Ghana do not allow for such practices,” read the statement, signed by the president of the bishops’ conference, Archbishop Philip Nameeh.

“We, the Catholic Bishops of Ghana write to condemn all those who support the practice of homosexuality in Ghana,” Archbishop Nameeh stated. “We do this because the Roman Catholic Church is opposed to this abominable practice.”

The bishops urged “the Executive and the Legislature never to be cowed down or to succumb to the pressure to legalize the rights of LGBTQI in Ghana,” adding that the Bible considers homosexuality as a “perversion and a pagan abomination.”

“To choose someone of the same sex for one’s sexual activity or for marriage is to annul the rich symbolism and meaning, not to mention the goals, of God’s sexual design,” the text stated. “Homosexual activity is not a complementary union, able to transmit life, and so it thwarts the call to a life of that form of self-giving which the Gospel says is the essence of Christian living.” 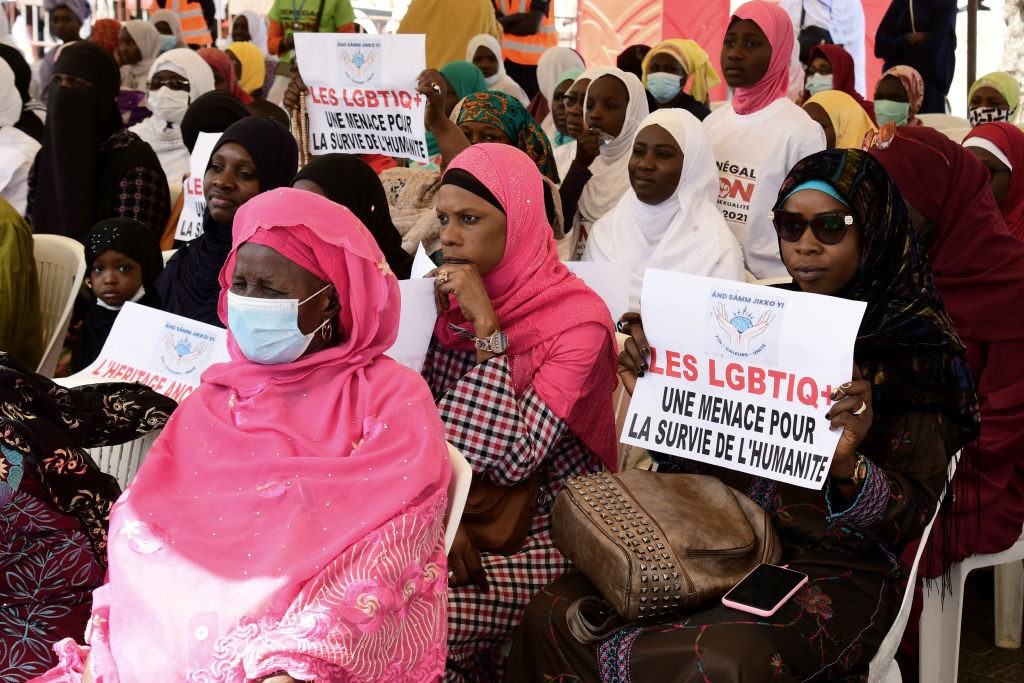 A woman holds a sign reading ‘LGBT is a threat for humanity’ during a protest called by religious associations against homosexuality on May 23, 2021, on the Obelisque square in Dakar. (SEYLLOU/AFP via Getty Images)

Last April, Cardinal Philippe Ouédraogo of Burkina Faso called on Christian families to “rebel” against LGBT lobbies that wish to “impose same-sex marriage” on the world.

“While adopting the positive values ​​of modernity, as active agents of the future of the world, African Christian families should rebel against the imperialism of certain lobbies and associations that advocate and want to impose same-sex marriage,” said Cardinal Ouédraogo, Metropolitan Archbishop of Ouagadougou, in his Easter homily.

Cardinal John Onaiyekan, the Catholic Archbishop of Abuja Diocese in Nigeria, said at the time that the position of Catholics against homosexual behavior is irrevocable and that the Church will continue to maintain its stand against gay marriage.

“Unfortunately, we are living in a world where these things have now become quite acceptable but for the fact that they are acceptable doesn’t mean that they are right,” he said. “The Catholic Church considers itself as carrying the banner of the truth in the world that has allowed itself to be so badly deceived.”