AFP — The toll from a devastating strike on the central Ukrainian city of Dnipro was expected to rise past 40 on Tuesday as rescuers searched the rubble for 25 people still missing after one of Russia’s deadliest attacks since its invasion.

“There is no doubt: every person guilty of this war crime will be identified and brought to justice,” Zelensky said in his nightly address late Monday.

Kyiv has called for more weapons to defend itself and at the weekend received pledges of British tanks, but Russian President Vladimir Putin warned more armaments would only intensify fighting and the Kremlin vowed to burn the gear.

A photograph shows a residential building destroyed after a missile strike, in Dnipro on January 16, 2023, amid the Russian invasion of Ukraine. – According to State Emergency Service report, as of 1:00 pm on December 16, 40 people died, including 6 children; 75 people got injured, including 14 children; 39 people were rescued, including 6 children; the fate of 34 people is still unknown. (Photo by vitalii matokha / AFP) (Photo by VITALII MATOKHA/AFP via Getty Images)

With tensions high, a top US official, Deputy Secretary of State Wendy Sherman, on Monday visited Kyiv where she expressed Washington’s “steadfast commitment” to Ukraine and discussed ways to bolster the country’s security posture with Zelensky.

In Dnipro, residents gathered to get warm drinks and food next to the partially collapsed Soviet-style residential building that was ripped open by the strike on Saturday.

Emergency services gave the new toll specifying that three children were among those dead, with 25 people still unaccounted for. Seventy-seven were wounded in the strike.

“The rescue operation, the demolition of the rubble, will not end until the bodies of all the dead are found. So far, 40 people have died,” said deputy head of the presidency Kyrylo Tymoshenko.

The Kremlin claimed its forces were not responsible and pointed to an unsubstantiated theory circulating on social media that Ukrainian air defence systems had caused the damage.

UN Secretary-General Antonio Guterres also condemned the strike, with his spokesperson saying it was “another example of a suspected violation of the laws of war”. 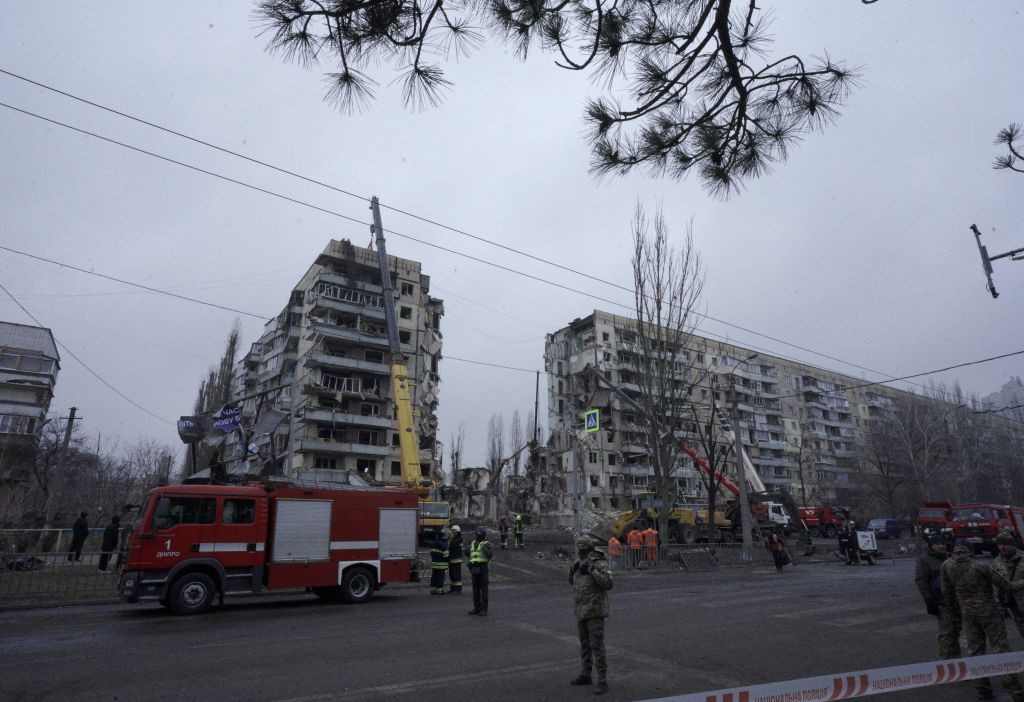 Rescuers work on a residential building destroyed after a Russian missile strike, in Dnipro on January 16, 2023, amid the Russian invasion of Ukraine. – According to State Emergency Service report, as of 1:00 pm on December 16, 40 people died, including 6 children; 75 people got injured, including 14 children; 39 people were rescued, including 6 children; the fate of 34 people is still unknown. (Photo by vitalii matokha / AFP) (Photo by VITALII MATOKHA/AFP via Getty Images)

In a visit to the war-torn country, the head of the International Atomic Energy Agency said it was setting up a permanent presence at all five of Ukraine’s nuclear facilities, including Chernobyl, which closed after the 1986 disaster.

“So we are now leaving a group of experts who are going to stay here permanently,” said Rafael Grossi, adding that agency staff will be “working hand to hand with our Ukrainian hosts, to facilitate some technical support, delivery of equipment, to make sure that all of these facilities… can continue running normally and without any problems.”

The decision marks a major expansion of the IAEA’s activities in Ukraine. Until now, only the Russian-controlled Zaporizhzhia plant, which is near the frontline, had a permanent IAEA presence.

To withstand Russian attacks, Ukraine has been pressing Western backers to supply it with advanced tanks, in particular the German-designed Leopard.

Berlin has been heavily criticised over its stuttering response to the war in Ukraine.

After months of criticism — and a series of gaffes — German Defence Minister Christine Lambrecht resigned on Monday.

It comes days before the Ukraine Defence Contact Group, which coordinates arms supplies to Kyiv, is due to meet in Germany. 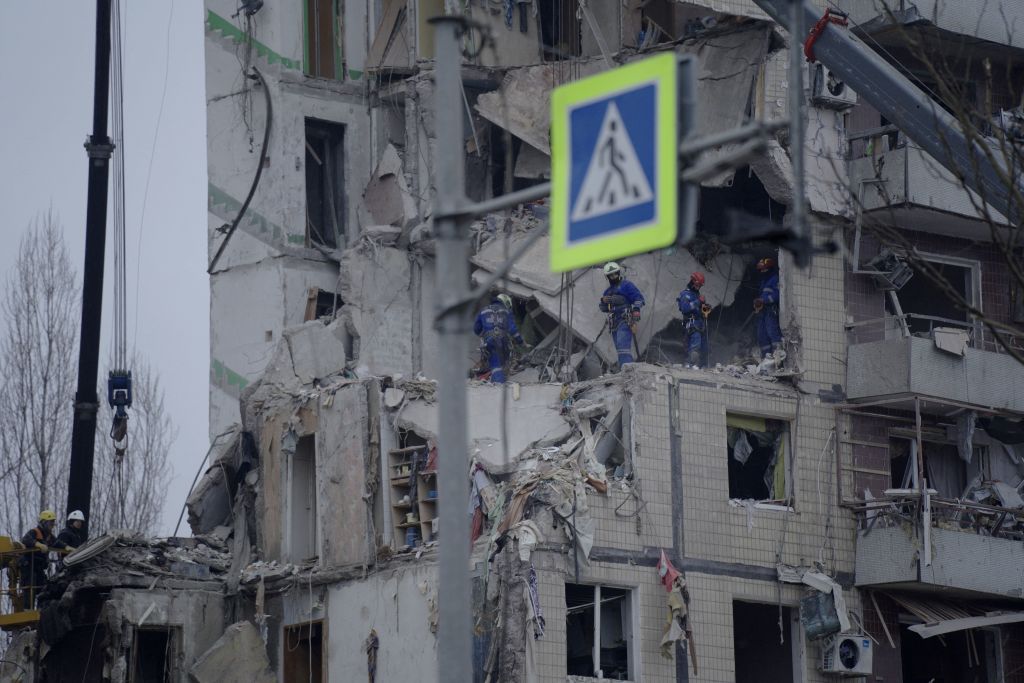 Rescuers work on a residential building destroyed after a Russian missile strike, in Dnipro on January 16, 2023, amid the Russian invasion of Ukraine. – According to State Emergency Service report, as of 1:00 pm on December 16, 40 people died, including 6 children; 75 people got injured, including 14 children; 39 people were rescued, including 6 children; the fate of 34 people is still unknown. (Photo by vitalii matokha / AFP) (Photo by VITALII MATOKHA/AFP via Getty Images)

Britain this weekend pledged 14 Challenger 2 tanks to Ukraine, which would make it the first Western country to supply the heavy tanks Kyiv has been calling for.

Putin on Monday slammed Kyiv’s “destructive” policies that “bet on the intensification of hostilities with the support of Western sponsors who are ramping up the supplies of weapons.”

His spokesperson told reporters that “these tanks are burning and will burn.”

A large team of Ukrainian ministers and officials headed by First Lady Olena Zelenska meanwhile began a major effort at the World Economic Forum in Davos, Switzerland to lobby for greater Western aid and weapons deliveries.

“We need to voice a clear message to the Russian leadership here and now that a war of aggression will not go unpunished,” Baerbock said.

Calls have grown for a way to try to punish Russian leaders for the crime of aggression, as the Hague-based International Criminal Court cannot do so under its rules.

Ukrainian soldiers have arrived in the United States to learn how to use the Patriot system, the Pentagon’s most advanced air defence system.

Washington promised Kyiv a Patriot battery in a significant victory for Ukraine.

The Patriot missiles can shoot down cruise missiles, short-range ballistic missiles and aircraft at a height significantly higher than the systems currently in place.