The Department of Labor’s Occupational Safety and Public Health’s (OSHA) emergency temporary standard (ETS), which imposes vaccine and testing requirements on private businesses with over 100 employees, forces weighty burdens on unvaccinated workers who choose the testing option. It requires them to wear a mask in almost all social situations and places the burden of testing costs of the individual, as OSHA’s rule “does not require employers to pay for any costs associated with testing.”

OSHA released the rule Thursday, weeks after President Biden announced his plans asking the agency to craft one. The rule requires employers with over 100 employees to “maintain a roster of each employee’s vaccination status” and enforce weekly testing requirements for those who refuse to get the vaccine. The rule, which goes into effect January 4, involves “planned inspections” and heavy fines of $14,000 per violation at the start.

A senior Biden official added that employers “willfully violating a standard” will face further penalties “significantly higher than a workplace that is not willfully doing so.”

People participate in a rally and march against COVID-19 mandates on September 13, 2021 in New York City. (Photo by Spencer Platt/Getty Images)

Employees who refuse to get the shot will be subject to a coronavirus test “at least weekly” if they are in an office at least once a week, or “within 7 days before returning to work” if away from the office for over a week. Notably, the ETS does not place the burden of testing costs on the employer, but the unvaccinated individual. However, OSHA says employers may be required to pay some of the costs of testing because of other laws or bargaining agreements. Nonetheless, the agency itself is not requiring employers to do so: 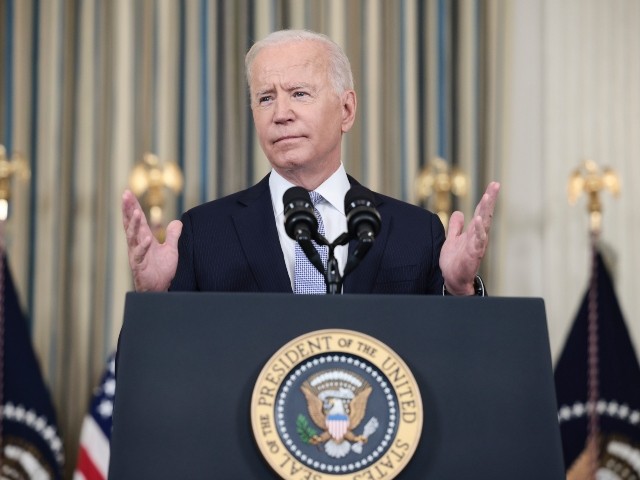 U.S. President Joe Biden gestures as he delivers remarks on his administration’s COVID-19 response and vaccination program from the State Dining Room of the White House on September 24, 2021 in Washington, DC. (Photo by Anna Moneymaker/Getty Images)

Additionally, the rule requires employers to force unvaccinated individuals to wear a face covering in virtually all scenarios — when indoors or “when occupying a vehicle with another person for work purposes, except in certain limited circumstances”:

Employers must not prevent any employee, regardless of vaccination status, from voluntarily wearing a face covering unless it creates a serious workplace hazard (e.g., interfering with the safe operation of equipment).

Mere months ago, the Biden White House explicitly said vaccine mandates were “not the role of the federal government.”