In the northern city of Trieste, for example, over 5,000 protesters flooded the port and rejected offers of free coronavirus tests while in Genoa the ferry terminal as well as the international airport terminal have been blocked by large anti-Green Pass manifestations.

Along with strikes, employers are reporting unusually high numbers of workers calling in sick, Italian media report. Some 80 percent of Italians have received the vaccine, along with the four and a half million who have been infected with coronavirus and recovered.

People gather for a protest against the so-called Green Pass on October 15, 2021 at Circo Massimo in Rome, as new coronavirus restrictions for workers come into effect. (ALBERTO PIZZOLI/AFP via Getty Images)

Many of Rome’s major piazzas became the scene for similar demonstrations Friday as citizens showed up in droves to make known their displeasure for what many believe to be an exaggerated hardline approach to the coronavirus.

Over a thousand police and security agents have been summoned to be present at a major protest scheduled later in the day at Rome’s massive Circus Maximus.

Among the most common reported chants and slogans from protesters are “Freedom,” “No green pass,” and slurs targeting the Draghi government, which is responsible for the mandate. 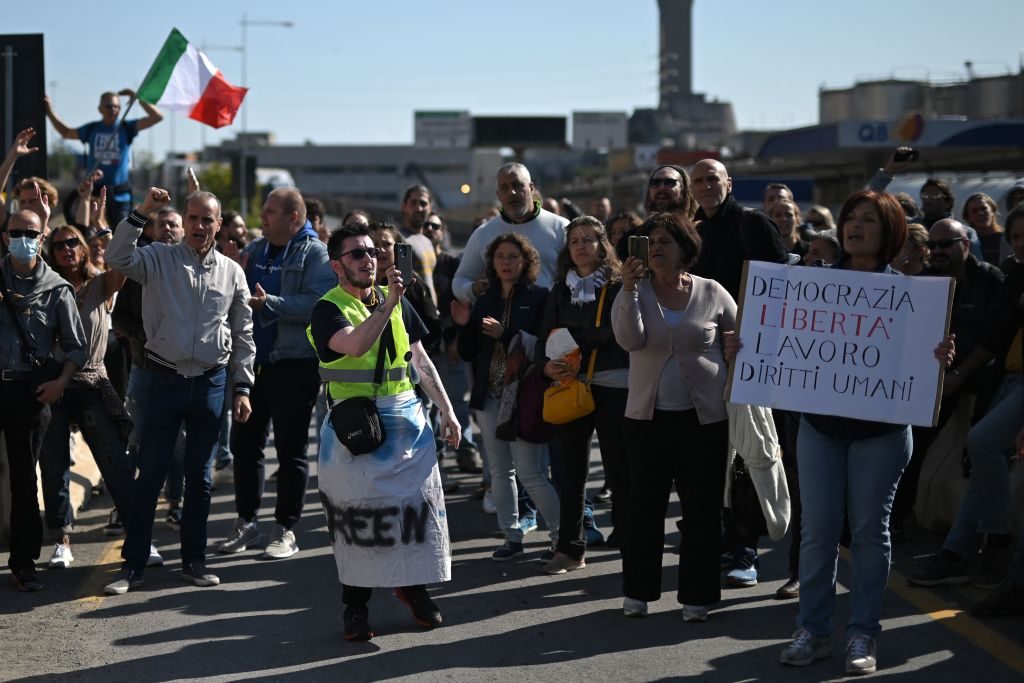 Workers block port operations at the Giuseppe-Canepa seafront opposite the Etiopia gate (Varco Etiopia) in the port of Genoa, Liguria, on October 15, 2021 as new coronavirus restrictions for workers come into effect. (MARCO BERTORELLO/AFP via Getty Images)

The number of actual cases of coronavirus have been moderate for weeks, as have numbers of deaths and patients requiring intensive hospital care because of the virus, leading some to rebel against tightening containment measures.

The sweeping mandate includes not only public employees, but also independent contractors, waitstaff, babysitters, and maids.

While workers can technically avoid the vaccine by getting a coronavirus test every two days, payment for the $25 tests must come out of their own pocket, making the option unattractive. 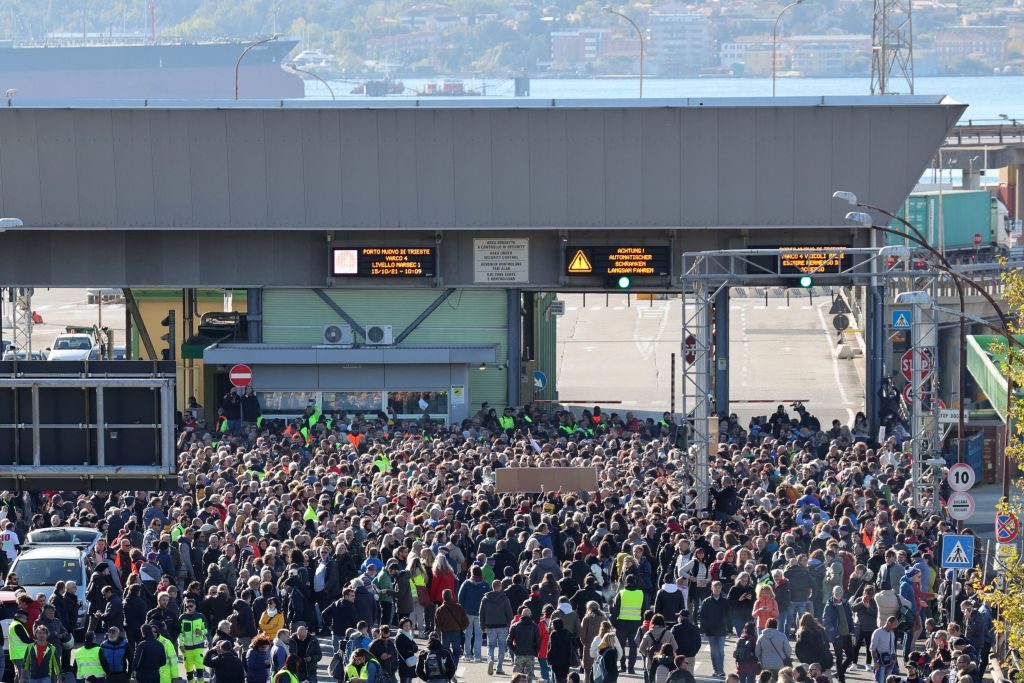 This photo obtained from Italian news agency Ansa shows dockers and port workers gathering at Gate 4 (Varco 4) for a protest in the port of Trieste, Friuli Venezia Giulia, on October 15, 2021 as new coronavirus restrictions for workers come into effect. (STRINGER/ANSA/AFP via Getty Images)

“The protests will continue until they get rid of the Green Pass mandate,” said Stefano Puzzer, leader of Trieste’s Port Workers Association.

“We are here because today more than 40 percent of people would not have been able to go to work,” Puzzer said. “The Green Pass is not a health measure but an economic one, blackmail done to people to get them to get vaccinated.”

“In the next few hours, there could be initiatives against the Green Pass in front of company entrances and at airports, ports, roads, motorway, and railway junctions, aimed at creating inconvenience with possible hindrance to the regularity of services and production activities,” the Department of Public Safety declared in a circular letter.