Despite reports of potential violence and beefed up security, including the National Guard and fencing, Saturday’s “Justice for J6” rally attracted a few hundred demonstrators and ended without major incidence.

Photos and video taken around the Capitol show media and police, many heavily armed and in riot gear, vastly outnumbered protesters, who were gathered in support of defendants detained in connection with the January 6 Capitol attack. 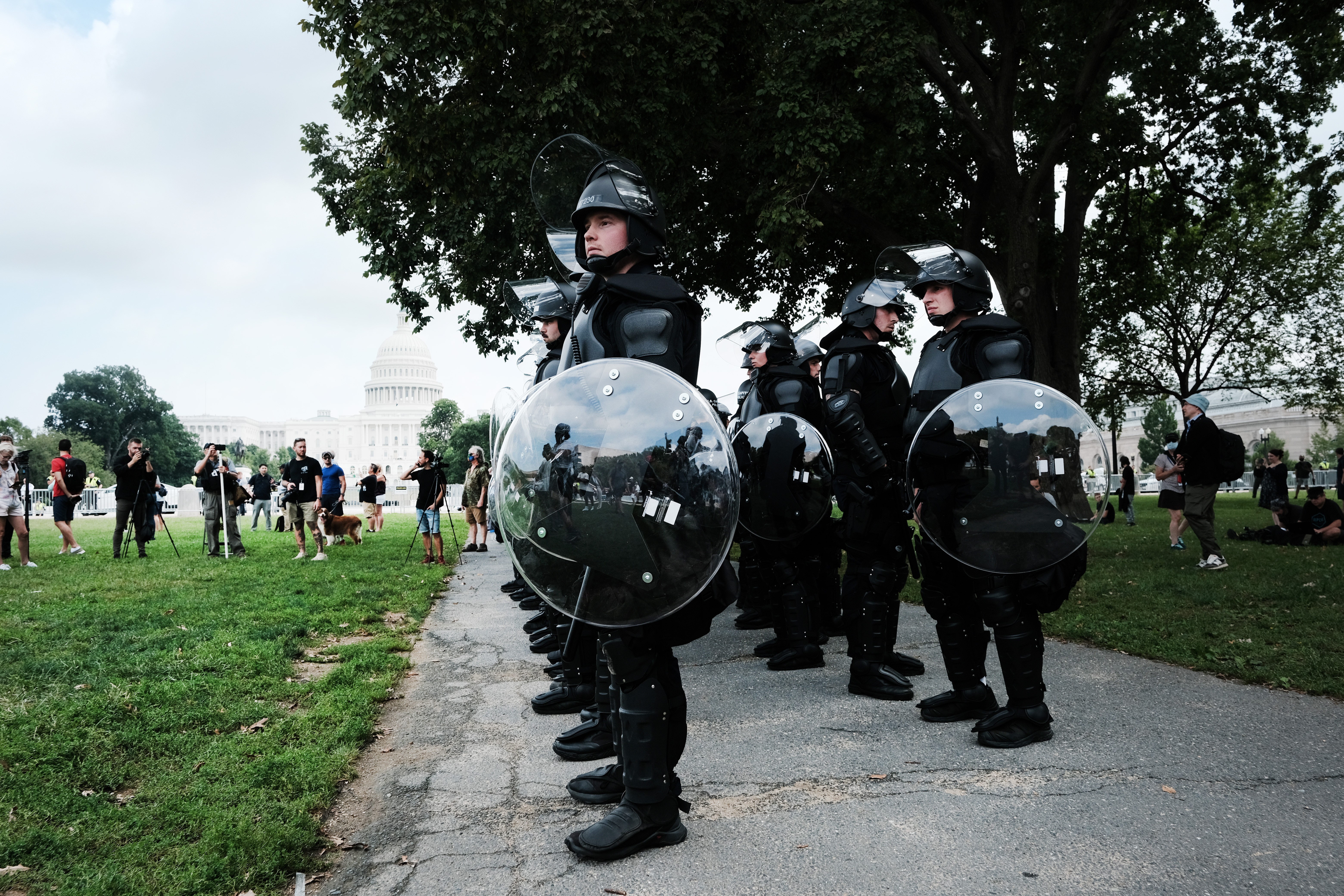 Police in riot gear stand in front of the U.S. Capitol during the ‘Justice for J6’ rally in support of those charged in the January 6 attack on the U.S. Capitol on September 18, 2021 in Washington, DC. (Spencer Platt/Getty Images)

200 journalists for an event that lasted 30 minutes and only a 100 or so attendees.

Capitol Police in riot gear lined up near the stage, as speeches continue here outside the Capitol Building pic.twitter.com/Jrk53Vtte8

At the J6 rally on the Mall, protesters are outnumbered by reporters. Massive police presence: helicopter, police dogs, dump trucks lining 3rd St. The cost per protester would be interesting to work out. pic.twitter.com/YjXXTW4Cdi

The event began with prayer, the Pledge of Allegiance, and the national anthem. 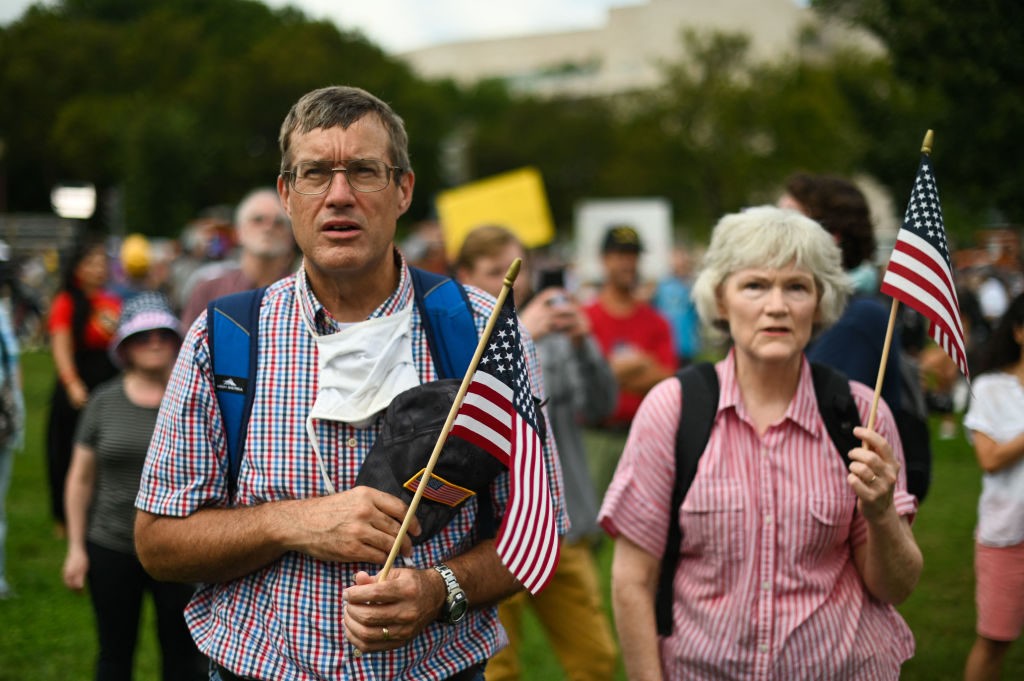 A couple recites the Pledge of Allegiance as demonstrators gather for the “Justice for J6” rally in Washington, DC, on September 18, 2021. (ROBERTO SCHMIDT/AFP via Getty Images)

“We condemn all violence, political violence,” said Matt Braynard, founder of Look Ahead America and organizer of the rally. “I’m demanding that you all are respectful and obedient to police officers today. In fact, I’d like to start off — can we please have a round of applause to the main police officers?”

Then a string of speakers spoke for about 90 minutes and condemned anyone who committed violent acts on January 6, 2021, and called for justice for dozens of people who were arrested in the wake of the riot, many of whom, they said, did not commit violent acts but remain behind bars months later. 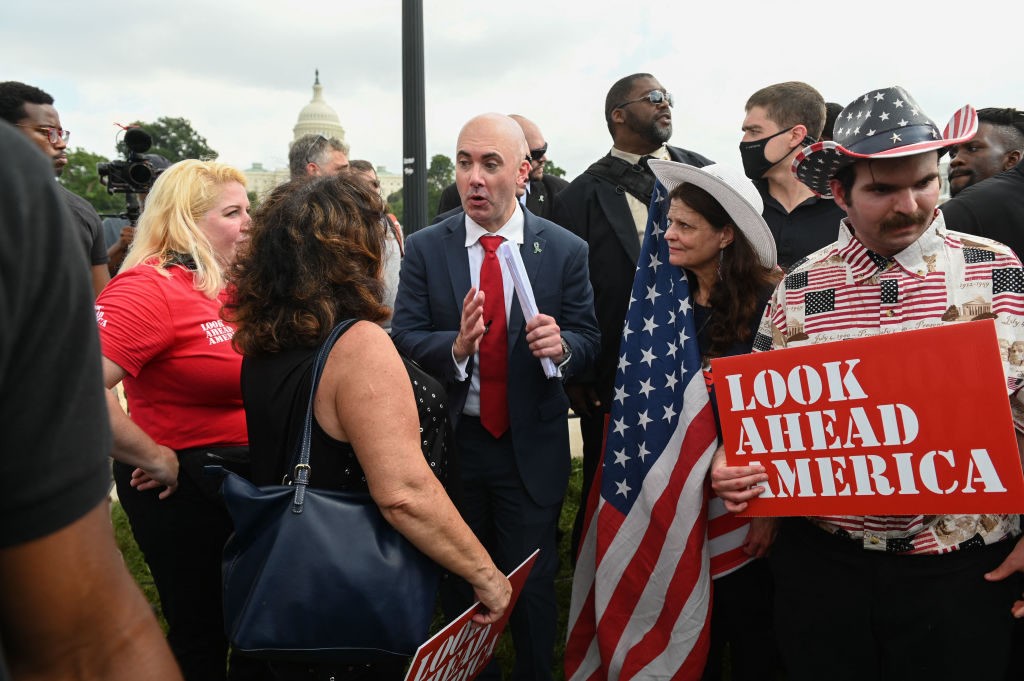 Matt Braynard, the rally organizer and executive director of Look Ahead America, speaks to a supporter as demonstrators gather for the “Justice for J6” rally in Washington, DC, on September 18, 2021. (ROBERTO SCHMIDT/AFP via Getty Images)

“This is about justice and disparate treatment and equal treatment under the law.”

In a video ahead of the rally, Braynard told people who wanted to attend not to wear shirts with any political message or disparaging signage.

Braynard pointed out that violent protests on the left, from Antifa in Portland, Oregon, to those who stormed congressional office buildings to protest then-Supreme Court nominee Brett Kavanaugh, were never prosecuted. These protesters, he said, were bailed out on the same day they were arrested.

This is in contrast to what Braynard and other speakers said is the treatment of people now jailed in D.C. related to the Capitol attack, some of whom have been allegedly kept in solitary confinement, and others reportedly not allowed to shave or cut their hair. 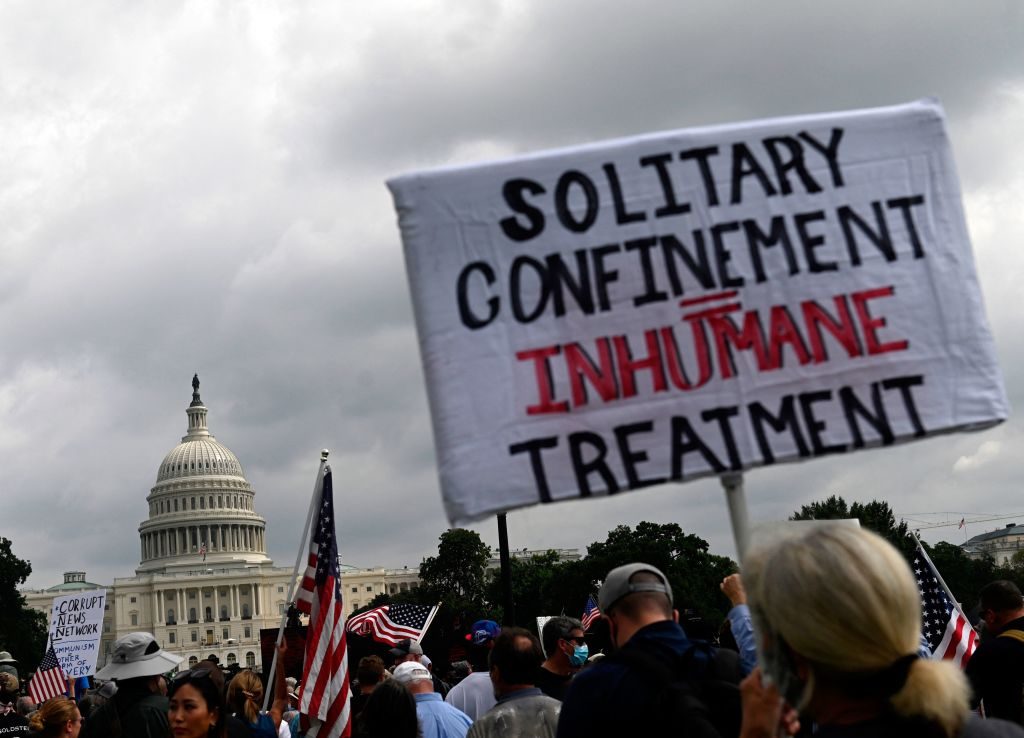 Demonstrators gather for the “Justice for J6” rally in Washington, DC, on September 18, 2021. (ANDREW CABALLERO-REYNOLDS/AFP via Getty Images)

Those in attendance called for transparency and the release of more than a dozen hours of video from January 6 still unseen by the public.

“Release the video!” the crowd chanted. “Equal justice or no justice!”

“We’re gonna raise our voices in defense of our fellow Americans who’ve had their rights and due process violated,” said Braynard, who called these individuals “political prisoners.”

“We’re gonna raise our voices, demanding justice for Ashli Babbitt and for the government to come clean on whatever involvement the FBI might have had in the events of January 6.”

“Do you see an insurrection?” Cara Castronuova, founder of Citizens Against Political Persecution, said at the rally. “Who watched the news this week? Who read the media? Who was terrified to come here? Shame on the people in the system that put fear in the hearts of American citizens to stay home and to not come out, many of whom have called me and messaged me begging and pleading for me to stay home because they fear for my life and my freedom.”

“What kind of America has this become where people are afraid to come out and protest?” Castronuova said. “This is a peaceful protest.”

At the event’s conclusion, Braynard asked the crowd to leave promptly and orderly and encouraged them to thank police for their service as they departed.

While there were no major security incidents, Capitol Police have since confirmed four arrests: two for weapons possessions and two for outstanding warrants, reports NBC Washington:

Update: Capitol Police say four people were arrested amid the Justice for J6 rally today: one with a gun, one with a knife and two with outstanding warrants. https://t.co/hj3sH1v45P

“We’ve got a weapon violation. He’s under arrest.” || Officer in white speaking as they lead man away from #JusticeForJ6Rally@wusa9 #Capitol @CapitolPolice @DCPoliceDept pic.twitter.com/cDrk3pR0JU

One agitator and maybe one j6 supporter has a literal stampede of press following them as cops separate the two pic.twitter.com/9IBxXXuY1o

Braynard said similar rallies are planned around the country in the coming weeks.

Biden’s New Hope to Solve the Supply Chain Crisis Is so Bad, It Defies Belief – RedState

Rutgers Professor Suggests She Wants To ‘Take Out’ White People