San Francisco’s Union Square, the high-end shopping district at the center of the city, is boarding up for the Christmas shopping season after a string of “mass looting” events that began on the weekend before Thanksgiving.

Normally, Union Square is festive and bright in December. Its giant Christmas tree and menorah attract visitors from across the region, as does its outdoor ice skating rink. Situated alongside the city’s famous cable car, it is an oasis of prosperity in a gritty downtown.

SAN FRANCISCO, CA – NOVEMBER 30: A security guard who identified himself only as Mario keeps watch outside The Real Real store, which has had its windows boarded near Union Square on November 30, 2021 in San Francisco, California. Stores have increased security in response to a spike in thefts. (Photo by Ethan Swope/Getty Images)

However, this year is different, as the San Francisco Chronicle reports:

As San Francisco approached the critical December shopping month, instead of holiday lights and Santa Claus decorations, dozens of downtown retailers greeted shoppers with plywood-encased storefronts and armed guards in the wake of mass retail thefts in Union Square two weeks ago.

Around a half-dozen stores in the Union Square area were boarded up on Tuesday, including the Louis Vuitton store and others that sustained damage during the robberies. Other luxury stores such as Gucci, which Mayor London Breed said had an existing security gate system and wasn’t damaged in previous robberies, had a guard outside as well.

It’s a stark contrast from previous years when December in Union Square was marked by windows full of holiday ornamentation and the seasonal enticement of products that could fit under Christmas trees.

Shoppers continue to come to the Union Square district, thanks to a large police presence. As Breitbart News reported last month, police restricted vehicular access to the square in the wake of the looting. 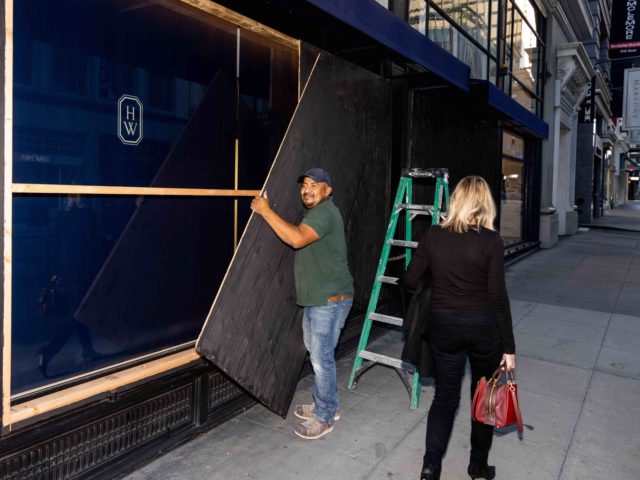 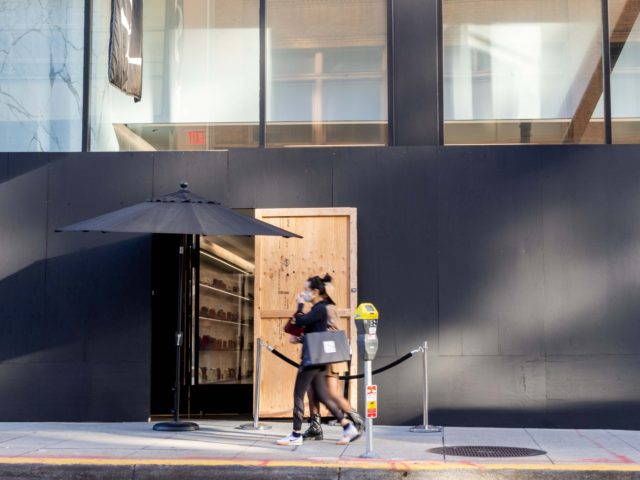 SAN FRANCISCO, CA – NOVEMBER 30: Pedestrians walk past a store with boarded up windows near Union Square on November 30, 2021 in San Francisco, California. Stores have increased security in response to a spike in thefts. (Photo by Ethan Swope/Getty Images) 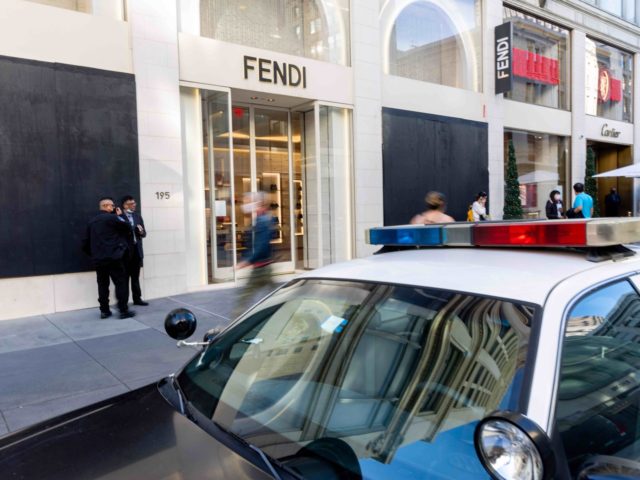 SAN FRANCISCO, CA – NOVEMBER 30: Pedestrians walk past a Fendi store with boarded up windows near Union Square on November 30, 2021 in San Francisco, California. Stores have increased security in response to a spike in thefts. (Photo by Ethan Swope/Getty Images)

Some retailers have called on Mayor London Breed to resign after championing proposals to reduce funding to the police. District Attorney Chesa Boudin faces a recall election, driven by residents who are frustrated by his refusal to prosecute petty and “quality of life” crimes in the city.

Many retailers boarded up their businesses last year during the Black Lives Matter riots, and again in anticipation of riots if President Donald Trump was re-elected last November. San Francisco has been forced to do so again because of looting unrelated to any particular political event. It is unclear how long the boards will remain up on Union Square shops.

Joel B. Pollak is Senior Editor-at-Large at Breitbart News and the host of Breitbart News Sunday on Sirius XM Patriot on Sunday evenings from 7 p.m. to 10 p.m. ET (4 p.m. to 7 p.m. PT). He is the author of the recent e-book, Neither Free nor Fair: The 2020 U.S. Presidential Election. His recent book, RED NOVEMBER, tells the story of the 2020 Democratic presidential primary from a conservative perspective. He is a winner of the 2018 Robert Novak Journalism Alumni Fellowship. Follow him on Twitter at @joelpollak.

Originally Posted on: https://www.breitbart.com/crime/2021/12/01/photos-san-franciscos-union-square-boards-up-for-christmas-after-mass-looting/
[By: Joel B. Pollak