Analysis of data compiled from the Netherlands reveals transgender individuals have a significantly higher mortality rate when compared to people without gender dysphoria, an outcome that suggests a need to closely examine the effects of hormone treatments.

The Lancet Diabetes & Endocrinology journal published a report Thursday on the data that was compiled from medical records over five decades.

Researchers Martin den Heijer, Ph.D., of Amsterdam University Medical Centre (UMC) and colleagues found mortality risk among the transgender population did not decrease between 1972 and 2018.

“The findings of our large, nationwide study highlight a substantially increased mortality risk among transgender people that has persisted for decades,” den Heijer said in a statement reported by HCPLive.

He added the observational data analysis suggests cross-sex hormone treatments may not be as safe in the long term as has been accepted:

Gender-affirming hormone treatment is thought to be safe, and most causes of death in the cohort were not related to this. However, as there is insufficient evidence at present to determine their long-term safety, more research is needed to fully establish whether they in any way affect mortality risk for transgender people.

Leon Weiler, of Cambridge, Mass., top, holds a flag while standing with other protesters in support of transgender rights beside the “Free Speech Bus,” painted with the words “boys are boys” and “girls are girls,” in the Harvard Square neighborhood of Cambridge, Thursday, March 30, 2017. (AP Photo/Steven Senne)

UMC operates a gender identity clinic, and, as the authors explain, data of transgender individuals who received hormone treatments between 1972 and 2018 were linked to Statistics Netherlands.

The researchers compared the ratio of deaths among transgender individuals to the rates for the general population. In addition, they defined mortality subgroups for cardiovascular disease, lung cancer, HIV-related disease, and suicide.

For transgender men (biological women), the data analysis found the mortality rate was 1.1 times that of men without gender dysphoria, revealing little difference. 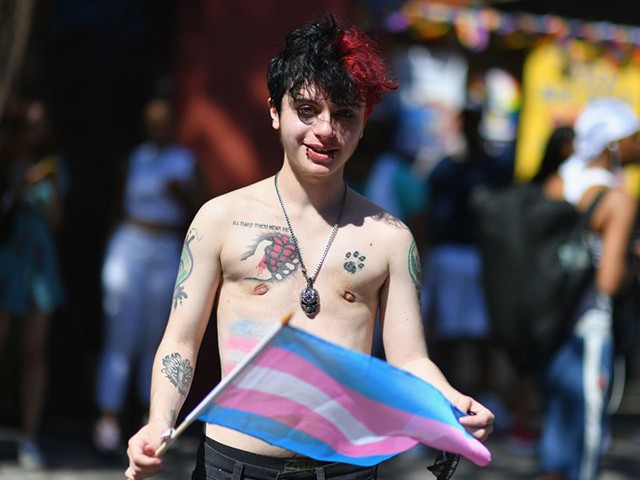 However, transgender men were 3.3 times more likely to die as a result of “non-natural causes,” for example, suicide, than women without gender dysphoria.

This observational study showed an increased mortality risk in transgender people using hormone treatment, regardless of treatment type. This increased mortality risk did not decrease over time. The cause-specific mortality risk because of lung cancer, cardiovascular disease, HIV-related disease, and suicide gives no indication to a specific effect of hormone treatment, but indicates that monitoring, optimising, and, if necessary, treating medical morbidities and lifestyle factors remain important in transgender health care.

“Increasing social acceptance, and monitoring and treatment for cardiovascular disease, tobacco use, and HIV, will continue to be important factors that may contribute to decreasing mortality risk in transgender people,” den Heijer said, according to HCPLive.